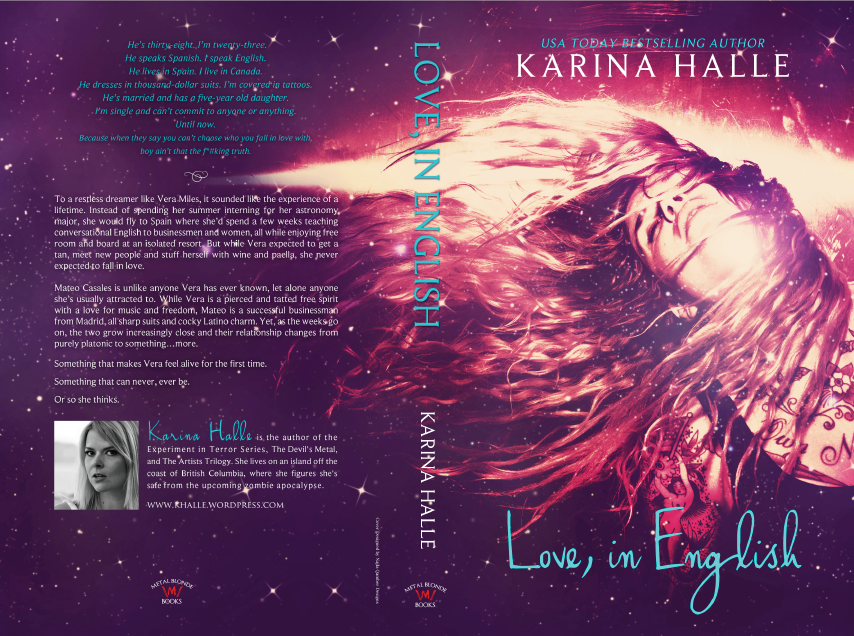 He’s thirty-eight. I’m twenty-three. He speaks Spanish. I speak English. He lives in Spain. I live in Canada. He dresses in thousand-dollar suits. I’m covered in tattoos. He’s married and has a five-year old daughter. I’m single and can’t commit to anyone or anything. Until now. Because when they say you can’t choose who you fall in love with, boy ain’t that the f*#king truth. To a restless dreamer like Vera Miles, it sounded like the experience of a lifetime. Instead of spending her summer interning for her astronomy major, she would fly to Spain where she’d spend a few weeks teaching conversational English to businessmen and women, all while enjoying free room and board at an isolated resort. But while Vera expected to get a tan, meet new people and stuff herself with wine and paella, she never expected to fall in love. Mateo is unlike anyone Vera has ever known, let alone anyone she’s usually attracted to. While Vera is a pierced and tatted free spirit with a love for music and freedom, Mateo Casales is a successful businessman from Madrid, all sharp suits and cocky Latino charm. Yet, as the weeks go on, the two grow increasingly close and their relationship changes from purely platonic to something…more. Something that makes Vera feel alive for the first time. Something that can never, ever be. Or so she thinks.

The silence crackled above our heads like a live wire. I could feel Jorge’s eyes on us as he reluctantly placed Mateo’s drink on the table and walked away. Part of me wished for him to come back, to break up the tension and the startling intensity in Mateo’s eyes. The other part was selfishly glad Jorge was leaving us in peace. When he disappeared back into the restaurant, Mateo and I were the only ones on the patio. I broke away from his eyes, focusing instead on his bottle of Aguila and the condensation that ran down the sides, looking blissfully cool in the sticky night air. Through all the weeks of joking, talking, the innocent physical contact, now I was astutely nervous about being alone with him. It wasn’t so much that I was afraid of him – I was afraid of me. Ever since that remark at dinner, I’d been afraid of what I’d do to him, how I’d break that moral code I promised for myself. He’s married, he’s married, he’s married, I told myself, watching a drop of water race from the beer to the table. His wife is beautiful and lovely, his daughter is sweet and you aren’t either of those things. But I could only tell myself that so many times. “Vera,” he said thickly. “Vera, look at me.” His voice was commanding, reaching a depth I hadn’t heard before. My eyes slowly slid over to him. I tried to speak but could only suck in my lip, probably taking all my lipstick off. “Show me the stars again,” he said. His eyes speared me like nothing else, his face becoming dangerously handsome. I looked up to the clear sky, to see the stars, but he reached out and grabbed my hand. His touch was hot, like his fingers were searing into my skin, that feeling of entering a hot tub on a cold night. I couldn’t help the shiver that ran gently down my spine. “Not those stars,” he said huskily, leaning forward. His lips were wet and slightly open. “Your stars. Why I call you Estrella.” I swallowed hard, my pulse burning along. I turned around in my chair so my back was to him and lifted up my hair, gathering it on the top of my head. His chair scraped loudly on the ground as he got up, a sound that struck a new kind of fear in me. No. Not fear. Anticipation. I heard him stop right behind me. I held my breath, wondering what he was going to do. One rough finger pressed down against the back of my neck, right on the spine where the tattoo began. I closed my eyes to the feeling, the currents it caused, traveling all the way down, making me wet. Jesus, I needed to get a hold of myself. “What star is this?” he asked, sounding like silk. I could wrap myself in his voice. “Alpharatz,” I whispered, as if I was letting him in on a secret. Maybe I was. His finger slid diagonally down, a trail of fire across the Pegasus line. “And this one?” “Markab.” “Why Pegasus?” I paused, the truth on my lips. Fuck it. We’d been nothing but honest with each other. “Because I want to fly free. And there’s no place higher than the stars.” He didn’t say anything for a few beats. I was tempted to turn around, to look at him, but I didn’t want him to take his finger off my neck. I was leaving in three days. He was going back to his family. This was all I had, his skin on my stars. He leaned in, his hot breath at my neck. “Are you afraid that love will clip your wings?” His words sank into me, making my blood buzz. Love. This was too hazardous a subject to discuss with him, not now. Not ever. With my breath shaking, I inched my neck away from his mouth and turned to face him. “No,” I said, looking him straight in the eye. “I’m afraid that losing love will.” His expression softened. He looked at my lips, his beautifully long eyelashes casting shadows on his tawny skin. “Then that makes two of us,” he whispered softly and for a long second I thought he was going to get it over with and finally kiss me, put an end to this strain between us, the yearning that made me ache inside. But he straightened up, his gaze avoiding mine, and went to retrieve his beer from the table. 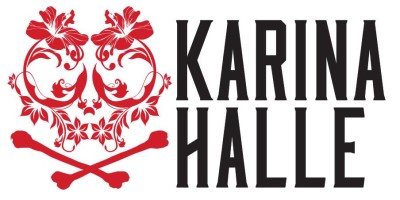 With her USA Today Bestselling The Artists Trilogy published by Grand Central Publishing, numerous foreign publication deals, and self-publishing success with her Experiment in Terror series, Vancouver-born Karina Halle is a true example of the term "Hybrid Author." Though her books showcase her love of all things dark, sexy and edgy, she's a closet romantic at heart and strives to give her characters a HEA...whenever possible.
Karina holds a screenwriting degree from Vancouver Film School and a Bachelor of Journalism from TRU. Her travel writing, music reviews/interviews and photography have appeared in publications such as Consequence of Sound, Mxdwn and GoNomad Travel Guides. She currently lives on an island on the coast of British Columbia where she’s preparing for the zombie apocalypse with her fiance and rescue pup."

a Rafflecopter giveaway
Posted by Rachel @Waves of Fiction at 6:58 AM