Review: Cowboy to the Core by Maisey Yates 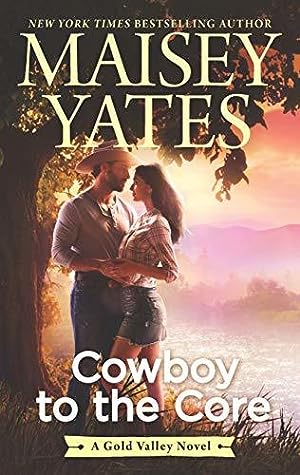 Jamie Dodge is confident she knows everything there is to know about cowboys. She grew up surrounded by them, after all. But somehow her new boss, champion saddle bronc rider Gabe Dalton’s brand of cowboy charm has her interested in all kinds of things she never has been before.

There are a million reasons Gabe should ignore his attraction to Jamie. He needs her horse-training skills on his family’s ranch…and the Dodge brothers would happily hurt him for touching her. Forget kissing her. He’d be a dead man. But Jamie’s tough-talking attitude masks an innocence that tempts him past the breaking point…and soothes the restlessness that’s dogged Gabe his whole life. Has this cowboy finally found a place he wants to call home?

My Thoughts:
Jamie Dodge and Gabe Dalton come from two prominent rancher families in Golden Valley, both rancher royalty in their own way.  Jamie is the youngest of the Dodge children, and only girl. Through the series, glimpses of Jamie show her to be a tough, feisty sister, not willing to show vulnerability.  Her mother died just days after giving birth to her, and she’d swear that you can’t miss what you never had. And yet, I felt Jamie’s loss along with her as her long ignored feelings surface. Especially, since working with Gabe Dalton brings out emotions she never thought she’d feel. There’s a bit of a snarky dance between Gabe and Jamie until it’s impossible to deny their mutual desire and attraction. Oh, their sexy times sizzled!

Gabe Dalton battles his own issues from the past.  His father was a habitual philanderer making his parent’s marriage a mess of full of constant up and downs.  Gabe fears he’s programmed to follow in his father’s footsteps if he attempts a serious relationship. However, his feelings for Jamie are anything but casual.

I was wrapped up in Jamie and Gabe’s story from page one!  I felt their emotions like they were my own; from their sadness and indignation, to their passion and lust. My only niggle is that things wrapped up a little maybe a little too easily and quickly for my tastes, and yet it was pretty low on drama, so I shouldn’t complain since over-the-top drama drives me nuts.  It’s always easy to sink in and want to tune out the world when I pick up one of Maisey Yates’ romances. And now I can’t wait to pick up the next book, which is centers on another Dalton, Gabe’s brother Jacob!

Posted by Rachel @Waves of Fiction at 9:31 PM