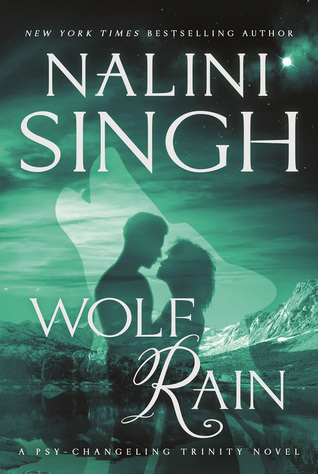 New York Times bestselling author Nalini Singh takes us on a new adventure in this next novel of the Psy-Changeling Trinity series...

The end of Silence was supposed to create a better world for future generations. But trust is broken, and the alliance between Psy, Changeling, and human is thin. The problems that led to Silence are back in full force. Because Silence fixed nothing, just hid the problems.

This time, the Psy have to find a real answer to their problems--if one exists. Or their race will soon go extinct in a cascade of violence. The answer begins with an empath who is attuned to monsters--and who is going to charm a wolf into loving her despite his own demons.

My Thoughts:
I think the description is a little misleading, because it features the side story a little too prominently, because this story is mainly about Memory, a woman who was held captive, and Alexei the Changeling Wolf who found and rescued her.

Memory, an E (empath) Psy, was a remarkable woman, who despite her long captivity retained her spirit and strength.  When Alexei finds Memory he’s enraged at the man who’s held her captive, but delighted to find Memory hasn’t been broken by the experience. She’s as fierce and furious as a lioness, and Alexei finds himself magnetically drawn to this amazing woman.  Alexei is determined, along with his Pack, to find and punish this man, before he hurts anyone else.

While Memory recovers and learns to strengthen her shields there’s an irresistible attraction brewing between her and Alexei. It’s intense, sexy, and fun! I love that Nalini Singh tempers some of the horrific parts of the story with humor. Alexei was a complete sweetheart!  He may be a growly, protective wolf, but he was charming and not above using naughty, playful nips as a distraction. There’s a lot of fun sparring between these two. While each have their sad histories, both were determined to keep the other out any dark funk that threatened to swallow them up.

As I said, there’s another story, part of the continuing arc in the Trinity spinoff. First, the Psy Net has been slowly collapsing because of “Silence” the way of life which has now, thankfully, fallen.  “Silence” the term the Psy used for living a life without emotions, and by doing that they excluded parts they didn’t know kept the Net healthy.  The Net doesn’t have long unless they find some solutions.  While the fall of Silence is a good thing, there have been some repercussions.   One of the repercussions plays a prominent part in this installment, and Memory ends up being a big factor as all these stories tie in together.  I was amazed to find out Memory’s abilities.  Nalini Singh’s creative mind never fails to impress me, with the addition of Memory in the whole equation and this wonderful fantasy world!

Wolf Rain was an addictive, sexy adventure, and I’m glad I set aside time to read chunks at a time.  It’s really not the kind of book you want to read in bits and pieces.  I can’t wait for the next one!

Posted by Rachel @Waves of Fiction at 7:23 PM