Review: Someone to Remember by Mary Balogh 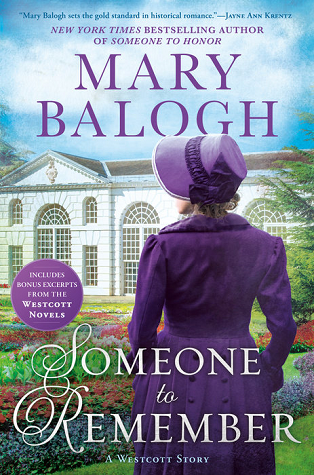 Someone to Remember by Mary Balogh
Publication Date: November 5th 2019 by Berkley
Pages: 272 (about 149 for the novella, the rest excerpts from the previous Westcott series)
Source: Publisher
Purchase Links: Amazon | Barnes & Noble | Audible

It's never too late to fall in love in this enchanting new story, a novella in the Westcott series from New York Times bestselling author Mary Balogh.

Matilda Westcott has spent her life tending to the needs of her mother, the Dowager Countess of Riverdale, never questioning the web of solitude she has spun herself. To Matilda, who considers herself an aging spinster daughter, marriage is laughable--love is a game for the young, after all. But her quiet, ordered life unravels when a dashing gentleman from her past reappears, threatening to charm his way into her heart yet again.

Charles Sawyer, Viscount Dirkson, does not expect to face Matilda Westcott thirty-six years after their failed romance. Moreover, he does not expect decades-old feelings to emerge at the very sight of her. When encountering Matilda at a dinner hosted by the Earl of Riverdale, he finds himself as fascinated by her as he was the first day they met, and wonders whether, after all these years, they have a chance at happiness together. Charles is determined to crack the hard exterior Matilda has built up for more than three decades, or he will risk losing her once again....

My Thoughts:
Someone to Remember was such a lovely romance! Mary Balogh never fails to bring out emotions, and I actually shed a happy tear (or two) while reading.

Matilda as a secondary character in the past, kind of blended in, she was labeled a mild-aged, fussy spinster, and sort of shuffled off to the side.  But in the last book Matilda took some initiative and made a bold move that would’ve been considered shocking at the time for the sake of a family member. There were hints at that point of a love lost between Charles and Matilda, and so I was hoping we’d get a romance between them. I was sooo thrilled that she got her second chance at with her first love!

As this is a novella, things do progress quickly between Charles and Matilda, and why shouldn’t they? They knew each other well thirty years prior, and now at a mature age it made sense that they knew exactly what they wanted once reunited.  I didn’t feel cheated out of the process because at first Matilda and Charles are tentative, and unsure of each other’s feelings; they feel vulnerable admitting just how much their parting affected them at the time and over the years. But I’m happy to say that they both chose to leave regrets behind, and not dwell on the lost years, because what does that accomplish other than sorrow?  And it would’ve made this a depressing read.  Instead, their meeting again is a joyful reawakening of the intense passion and love they felt for each other. Matilda and Charles “twinkled” with happiness and it was such a delight!

Matilda might be considered to be in the “shady” part of her middle age, at fifty-five, but before you go thinking that fifty-five is old, think about some of these women and tell me if you see them as elderly: Gillian Anderson is fifty-one, Sigourney Weaver is seventy, Famke Janssen is fifty-four. As a woman turning fifty soon, I can tell you I don’t feel old, well most days I don’t, lol. I didn’t get into running until my mid-forties and I ran my second half-marathon earlier this year. So of course, I’m over the moon that Matilda got her chance to shine and reclaim her one true love!

Posted by Rachel @Waves of Fiction at 8:44 PM