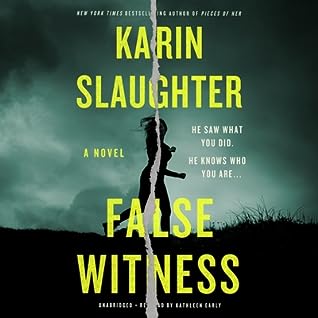 False Witness by Karin Slaughter
Publication Date: July 20th 2021 by Blackstone Publishing
Pages: 448
Audio Book Length: 18 hrs 39 min
Narrator: Kathleen Early
Source: Publisher
Rating: ★★★★★
Links: Amazon | Barnes & Noble | Kobo | Audible | Goodreads | Libro.fm
My Thoughts:
Leigh and her sister Callie seem like a lesson in opposites, Leigh is a successful defense attorney with a beautiful daughter and a sort of ex-husband, Walter, she still gets along with (I was rooting for them!). Callie is a junkie, and has been for years, doing anything to chase that next high, but they’ve been forever bonded by more than just blood.  While Leigh seems to have it all together, and Callie’s life has leveled out a bit, all could unravel when Leigh’s is forced into defending Andrew Tenant, the accused, in a brutal rape case. These sisters, while estranged would do anything for each other, but that’s put to the test when Leigh discovers just who Andrew is and what he knows about their past.
I love Karin Slaughter’s stories; I’m enthralled and in awe of her talent every time I pick up one of her stories! False Witness was a pulse-pounding, suspenseful plot, and I didn’t want to stop listening! Even when I’d have to (since I need sleep to work!) I spent a good amount of time lying awake and thinking about Leigh, and Callie and how it would all turn out! Their story broke my heart in parts, but even with the intensity and grittiness of the story the love between these sisters and their people (Walter, Maddy, and Dr. Jerry) warmed my heart. There was even a bit of humor to offset some of the tension.  I wanted these two to kick some ass and conquer!
Kathleen Early’s performance was fantastic! She narrates Karin Slaughter’s Will Trent series, and several of her standalone novels so I’m familiar and a big fan. Will Trent is one of my all-time favorite mystery/thriller series’ and it wouldn’t be the same without her narration!
5 Stars

Leigh Coulton has worked hard to build what looks like a normal life. She has a good job as a defence attorney, a daughter doing well in school, and even her divorce is relatively civilised - her life is just as unremarkable as she'd always hoped it would be.

HIDES A DEVASTATING PAST

But Leigh's ordinary life masks a childhood which was far from average... a childhood tarnished by secrets, broken by betrayal, and finally torn apart by a devastating act of violence.

BUT NOW THE PAST IS CATCHING UP

Then a case lands on her desk - defending a wealthy man accused of rape. It's the highest profile case she's ever been given - a case which could transform her career, if she wins. But when she meets the accused, she realises that it's no coincidence that he's chosen her as his attorney. She knows him. And he knows her. More to the point, he knows what happened twenty years ago, and why Leigh has spent two decades running.

AND TIME IS RUNNING OUT

If she can't get him acquitted, she'll lose much more than the case. The only person who can help her is her younger, estranged sister Calli, the last person Leigh would ever want to ask for help. But suddenly she has no choice...