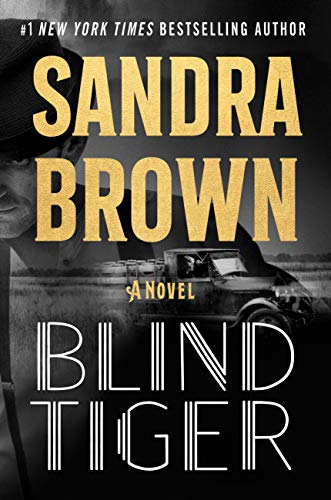 Blind Tiger by Sandra Brown
Publication Date: August 3rd 2021 by Grand Central Publishing
Pages: 512
Source: Publisher
Rating: ★★★★
Links: Amazon | Barnes & Noble | Kobo | Goodreads | Audible
My Thoughts:
Blind Tiger takes us back to 1920’s when the country is just recovering from the Great War and Prohibition is law. Running moonshine has become a lucrative and dangerous fact of life and the little Texas town of Foley is full of moonshiners vying for market share.
Thatcher Hutton a soldier on his way home but ends up in Foley. He just wants to make enough money to get back home but is caught up in the disappearance of a woman, bootlegging and intrigued by a headstrong widow, Laurel Plummer. The minute he lays eyes her he’s drawn in even though she’s completely prickly with him.
Young widow Laurel wants to never be completely reliant on a man again. She’s determined to find a way to provide for herself and falls into a dangerous opportunity. Suspicious of Thatcher and yet drawn to him it’s a push and pull of desire between them. They had great chemistry and I knew it just a matter of time before they gave into their attraction.
This was an interesting and volatile period in history, and even though the story was a little slow going at first, I was immediately engrossed. Sandra Brown’s short chapters that usually end with a bit of a cliffhanger sucked me right in, and as usual there were a few surprising twists and turns, a feature I love about her writing!  I didn’t want to put it down and ended up putting off another book I planned to read so I finish!
4 Stars

The year 1920 comes in with a roar in this rousing and suspenseful novel by #1 New York Times bestselling author Sandra Brown. Prohibition is the new law of the land, but murder, mayhem, lust, and greed are already institutions in the Moonshine Capitol of Texas.

Thatcher Hutton, a war-weary soldier on the way back to his cowboy life, jumps from a moving freight train to avoid trouble . . . and lands in more than he bargained for. On the day he arrives in Foley, Texas, a local woman goes missing. Thatcher, the only stranger in town, is suspected of her abduction, and worse. Standing between him and exoneration are a corrupt mayor, a crooked sheriff, a notorious cathouse madam, a sly bootlegger, feuding moonshiners . . . and a young widow whose soft features conceal an iron will.

What was supposed to be a fresh start for Laurel Plummer turns to tragedy. Left destitute but determined to dictate her own future, Laurel plunges into the lucrative regional industry, much to the dislike of the good ol’ boys, who have ruled supreme. Her success quickly makes her a target for cutthroat competitors, whose only code of law is reprisal. As violence erupts, Laurel and—now deputy—Thatcher find themselves on opposite sides of a moonshine war, where blood flows as freely as whiskey.

Posted by Rachel @Waves of Fiction at 9:55 AM