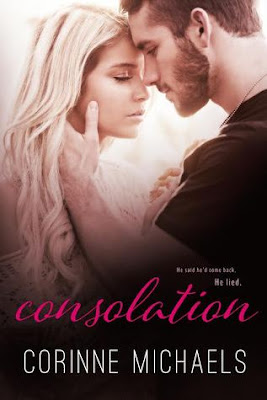 Book One in the Consolation Duet

Liam wasn’t supposed to be my happily ever after.
He wasn’t even on my radar.
He was my husband’s best friend—forbidden.

But my husband is dead and I’m alone. I ache for him and I reach for Liam.

One night with Liam changed everything. Now I have to decide if I truly love him or if he’s just the consolation prize.

My Thoughts
After seeing so many great reviews and ratings for this novel, I just had to pick it up to experience firsthand what all of the fuss was about. I definitely enjoyed Consolation despite the fact that I predicted some major twists pretty early on in the story. However, that didn’t stop me from devouring this story and immediately jumping into the second installment of this duet.

Consolation starts off with a pretty dramatic opening scene. Natalie and Aaron are expecting their first child, and with Aaron away on a Navy Seal assignment, she eagerly prepares for the birth of their daughter. However, Lee’s life falls apart when she gets that dreaded knock on the door to let her know that her husband won’t be returning home. For months, Lee struggles with the death of her husband. However, she has a small child to care for on her own, so giving up is not an option. When Aaron’s best friend Liam shows up at her door to help her tie up some loose ends, they begin to find a balance between each other, which eventually turns into love.

Well, good love stories never come wrapped with neat little bows and perfectly crafted moments. Lee and Liam work hard at coming to terms with their feelings for one another, but they can’t deny the chemistry that exists. However, just when they hit their stride, another blow knocks Lee down and from then, the hits just keep on coming.

Overall, I really enjoyed this story. As I mentioned before, there were a few moments of predictability, but they were still played out very well. The cliff hanger at the end of the first novel had me immediately jumping into the next book. So far so good. Corinne Michaels is definitely an author whose stories I can enjoy, so I have no hesitation diving into her other books. I actually already have them at the ready. :)
4 Suns