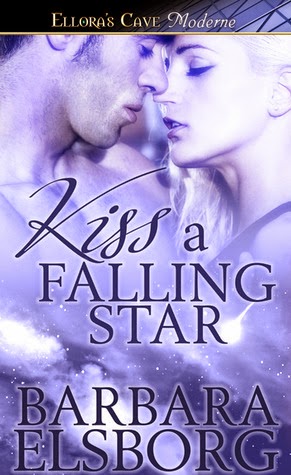 How far can you fall? Caspar had once shone brighter than any star in the sky. He led an exciting life, had a good job and the love of his family. Now he barely survives in a village where he's shunned by everyone, even his parents. Unemployed, unemployable, he consoles himself with stringless sex-lots of it.

How hard can you land? Ally escapes death by a whisker when she falls in front of a train. Not an accident, someone pushed her, and she doesn't hang around to give them another shot. But she finds herself falling in a different way when she meets Caspar, and she plummets hard and fast. He's dark, he's brooding, he's hotter than any man she's ever met, and she wants him-bad.

How high can they soar? With Ally's adversary closing in, plus Caspar's tendency to screw things up, if they don't open their arms and catch each other, they'll burn up in an atmosphere determined to keep them apart.

My Thoughts
I love Elsborg's writing... ESPECIALLY when she couples two unlikely people and shares their journey with sexy, witty banter, tons of chemistry and high action adventure.

Caspar and Ally were a perfect match in all the right ways. When Ally find herself running off to her brother's cottage after several attempts on her life, she meets the recluse, outcast Caspar. Ally makes it her mission to get to know him despite the villagers warning her to keep her distance. Throughout the entire novel, these two match up like oil and water, but it's the perfect combustible combination. I loved Ally's constant quest to redeem Caspar, and it was hard not to fall for this brooding, sexy man. They were a great match!!

As signature to Elsborg’s style, she wins her readers over immediately with her funny, smart and sexy dialog. Her characters are often bumbling messes, but that’s what makes her adventures even more fun. I can always count on Elsborg to entertain me and make me fall in love with her cast.

I’ve just about exhausted my list of possibilities with this author because I’ve breezed through most of her novels. Write more Elsborg!! Lots more!!
4 Suns