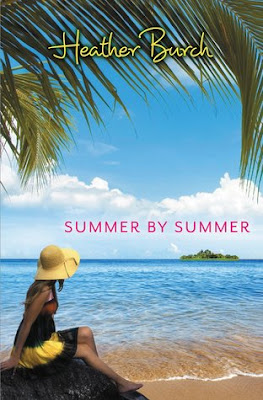 When Summer took a job as a nanny for a couple vacationing in Belize, she imagined it would be a fresh start before starting college in the fall. And while she adores her charge, Josh, she can’t say the same for her employers’ oldest son, Bray. He’s cocky, inconsiderate, and makes her feel she’s a chore he has to put up with. In short, he’s everything she dislikes in a guy.

Bray had a plan for the summer: party, hang out with friends, and forget all the responsibilities waiting for him back home. But every time he’s forced to be around Summer, her dour, serious mood sets him off. Not to mention she has a habit of picking up on what he already knows is wrong with him.

Then the two find themselves on a dive trip gone wrong, stranded on a remote island. As they focus on survival, their differences melt away, and they find being together may be what both needed all along.

Great summer read! Summer by Summer is exactly what I was looking for when searching for a beach-side companion.

When Summer takes a job as a nanny for a ten year old boy, she never expects to collide with the family's older son. Bray has just returned from his first year in college and has decided to join his family on their summer vacation in Belize. Summer and Bray soon find themselves stranded on a remote island after a dive excursion that went wrong after a heavy storm caused their boat to veer off miles from their destination. Together these two must find a way to survive on the island with minimal provisions and constant exposure to danger.

Summer by Summer was one of those ALA grabs I was lucky enough to acquire. It sounded interesting and exactly like something I would definitely enjoy. However, when I came home and looked up the reviews, the mixed reactions had me skeptical at first, but I'm glad I have it a go despite the varying opinions about this book.

Summer and Bray were a lovely pair that struggled through some pretty rough weather to survive. I admired their strength and courage that shined throughout the story.

Overall, it was a very sweet story that did carry a mild religious undertone, but was never overwhelming. I enjoyed this book by Heather Burch and would gladly pick up another read by this author.
4 Suns