Review: The Legend by Donna Grant 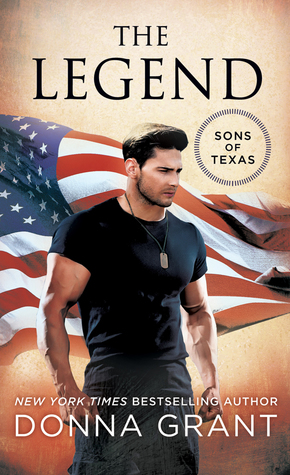 Callie Reed doesn’t need a man to protect her. An expert sharpshooter and renegade hacker, this Texas-born spitfire’s got the skills and the courage to stand up to any danger―no matter how deadly. But when she becomes the target of a shadowy organization known as the Saints, Callie is forced to team up with the one man she can’t outshoot: the gorgeous, and infuriating, Lone Star legend named Wyatt Loughman…

A Delta Force Colonel with a rock-hard body and stone-cold heart, Wyatt has been teasing and tormenting Callie since they were playmates on his family’s ranch. Of course, he’s wildly attracted to the fiery, strong-willed Callie. But he’s always hidden his feelings behind a wall of Texas tough and military cool, even as he’s burning up with desire. Can Wyatt save Callie’s life―without putting her love in the line of fire?

My Thoughts:
Callie Reed is no stranger to danger.  Her family is notorious for scheming and bilking funds off others.  The family business isn’t anything she wants to join.  Instead Callie got work at the Loughman’s Ranch with Orrin Loughman, the family’s patriarch, treating her like a daughter.  However, his son Wyatt’s feelings towards Callie were never brotherly. When she first came to the ranch Wyatt didn’t trust that Callie wasn’t exactly like her kin, but she proved him wrong with hard work and determination. Wyatt fell hard for her, and their mutual attraction led to a hot and passionate summer, but that quickly came to an end when Wyatt’s mother was murdered and grief and anger took over.  Wyatt left the ranch and signed up for Delta Force, but he never forgot Callie.  Now fifteen years later Wyatt is back since a nefarious group, The Saints, are targeting his family and the world.  Seeing Callie again has stirred up all those long-buried feelings, but do they have any chance together after so long? Can Callie forgive him? Do they even have a future with the danger his family faces? Wyatt doesn’t know that he could even stick around if there was, but he’s beginning to realize all that he missed out on by leaving.

Callie fell in love and had her heart crushed by Wyatt Loughman.  The memories of those hot sultry summer nights they spent together so long ago are brought back when Wyatt returns to help, but Callie doesn’t want to let him have a chance to hurt her again, so she tries to keep everything professional and business-like. But the heart wants what the heart wants, and the danger that keeps coming for them underscores the fact that life is short, better grab hold of love while you can.

I enjoyed this story, but I think I would’ve liked it more had I read the previous stories because of the ongoing story arc with the Saints and their past with the Loughman’s.  There was much I didn’t understand, and storylines with other characters at play with this installment that I didn’t get. Still, I’m a sucker for a second chance romance, and when the story focused on Callie and Wyatt I perked up. Danger, action, and revelations about the murder of Orrin’s wife (Wyatt’s mother) unfold.  Like I said, some of this was over my head.  I would like to go back and read/listen to the previous books, because Ms. Grant sets a fast pace and writes an addictive plot.