Review: A Touch of Frost by Jo Goodman 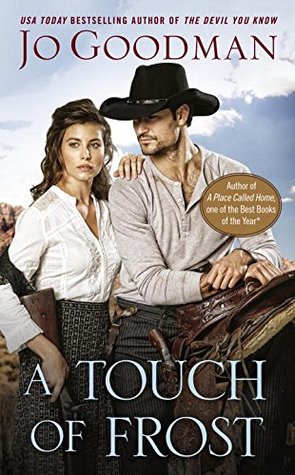 After his train is robbed at gunpoint, Remington Frost awakens from a blow to find the bandits gone...along with the woman he was shadowing for protection. No stranger to risk, Remington will do what it takes to bring Phoebe Apple to safety and her kidnappers to justice. But ransoming Phoebe is just the start of trouble...

Phoebe is shocked to learn that her mysterious rescuer is none other than Remington Frost, the son of her sister's new husband. Home at Twin Star Ranch, she falls happily into western life--and cautiously in love with Remington. But danger hides close to home, and their romance illuminates a web of secrets and betrayal that may put the rancher and his intended bride past the point of rescue.

A Touch of Frost took me back to the old west back in 1800’s.  I’m always curious about how people lived and got by years ago, and it was interesting to get a glimpse into that time.  The old west ranch life is appealing to me, and Colorado from the descriptions sounded like a beautiful place. Phoebe and Remington’s romance captured my heart right away, and there was a bit of suspense mixed in to keep the story exciting.

Phoebe has grown up in New York, her life revolving around working stage/theater where her older sister, Fiona was a star for many years only to give it up for a handsome older cowboy/widower, Thaddeus Frost.  Wasn’t a huge fan of Phoebe’s sister, and her drama, but by the end I could understand some of it.

Phoebe takes the train out to join her sister out in Colorado on the Twin Star Ranch only to be held up and abducted off the train.  Never fear, Phoebe’s brother-in-law sent along his son, Remington, to watch over her, and make sure she makes it safely to Twin Star.

Phoebe was a spunky heroine I immediately connected with. Loved the banter between her and Remington!  They had great chemistry, and once their romance took off it was super hot! Also, the men in historical romances never seem to have issues with committing like modern day romances and that eliminates some of the frustration or uncertainty I feel while reading contemporary romances.  Once Remington got to know Phoebe he was determined to stick by her.

There was some action, a few twists, and danger rounding out this western historical romance quite nicely.  This is my first time reading Jo Goodman, so I was pleasantly surprised to enjoy this as much as I did.  I’ll be checking her backlist for sure.