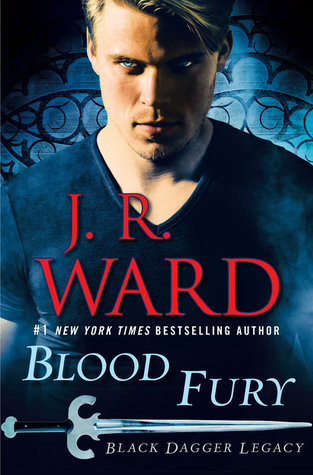 A vampire aristocrat, Peyton is well aware of his duty to his bloodline: mate with an appropriate female of his class and carry on his family’s traditions. And he thought he’d found his perfect match—until she fell in love with someone else. Yet when his split-second decision in a battle with the enemy endangers the life of another trainee, Peyton has to face the idea that his future, and his heart, actually lie with another.

Novo, as a female in the Black Dagger Brotherhood’s training program, feels like she has to prove herself to everybody—and she has no interest in being distracted by falling in love. But when Peyton proves to be so much more than a rich playboy, she is forced to confront the tragedy that has broken her soul and closed her off from love.

Saxton, who has had his heart broken, discovers in himself a deep-seated attraction to Ruhn, a new member of the household. But will the other male explore the connection? Or will he close his mind and his heart to what could be true love . . . and cost Saxton everything?


My Thoughts:
Blood Fury had not one, but two romances I thoroughly enjoyed. Novo and Peyton may throw verbal barbs at each other, but there’s an undercurrent of attraction brewing between them.  Novo, however, writes Peyton off as a rich, shallow playboy, normal for the aristocratic glymera. Also, it seems Peyton does nothing but moon over Paradise, another member in their training team. It doesn’t matter Paradise is bonded to another male, Novo wants nothing to do with a male who just wants to get his rocks off while in love with someone else.  She’s been hurt in the past and will not allow anyone close enough to damage her heart again.  Yet, when Novo is injured Peyton is the one who stays by her side and for some reason she allows it, wants his presence even.

Petyon realizes whatever he felt for Paradise pales in comparison to his feeling for Novo when she’s injured. He also realizes he needs to play things just right with her as he senses her need to keep others at a distance. I loved that he took this all into consideration while being there for her exactly when she needed him. Their romance was hot and touching, and I loved every minute!

We met Ruhn in the last book; Bitty’s uncle come to reunite with her as the only family she has left, but he’s been struggling to fit into life at the mansion.  Even though the Brothers and family have been nothing but welcoming, he can’t help but feel less in their presence due to his past, which come to find out is completely heartbreaking.  Also, he has no job and doesn’t feel right just taking the Brother’s generosity.

Saxton, Wrath’s chief advisor and attorney has been hurting ever since Blay chose another over him.  His emotions feel bleak and directionless and he’s thinking of getting out of Caldwell and away from the constant reminders of Blay.  However, a situation pairs Ruhn and Saxton together, and his heart is once again awakened.

I loved Ruhn! He’s so big and intimidating to look at, but all mushy heart and feelings underneath!  Saxton and Ruhn were at first tentative and unsure about each other’s feelings and it was cute seeing them fall for each other.  The romance was sweet, and I’m thrilled these two connected.

I’m really loving the new generation of Black Dagger stories!  J.R. Ward’s storytelling is captivating, and hot without adding a bunch of unnecessary angst.  Just what I needed after reading two underwhelming stories, and it really made Ms. Ward’s talent stand out in contrast.