Review: Howl For It by Shelly Laurenston & Cynthia Eden 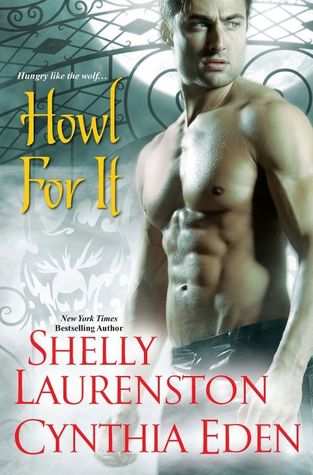 They hunger for your pleasure. They growl for your touch. And in these sizzling stories by New York Times bestselling author Shelly Laurenston and Cynthia Eden, these sexy wolf shapeshifters are lust at first bite. . .


Like A Wolf With A Bone by Shelly Laurenston

Quiet little Darla Lewis couldn't be happier when the most-feared member of the South's rowdiest pack kidnaps her. A girl gets real tired of being overprotected by her own shifter family, and there's nothing like an oh-so-big bad wolf to start a pack feud, unleash her instincts--and have her surrender however and whenever she wants. . .


Wed Or Dead by Cynthia Eden

Gage Ryder knew his human bride had a wild side. But spending their honeymoon night on the run from hunters out to finish him and his pack is sure not the kind of fun he was looking forward to. No problem--Gage will do whatever it takes to lay bare Kayla's secrets and find the truth. If he can keep from being captured by his own seductive game.

My Thoughts:
Howl For It was two paranormal shifter romances in one book, each novella length. I originally picked up the book because I’m a big fan of Cynthia Eden’s romantic suspense novels, but I’d never tried her fantasy books. After reading Wed or Dead, I’m definitely trying more of her paranormal books, because it was fantastic!  I’ve never read Shelly Laurenston’s stories, so I was pleasantly surprised by her story! It had me cracking up and it was pretty hot!

Egbert Ray Smith, Eggie for short, is on break from the Marine Corps and back home with his family, the Smith Pack.  As usual there’s family drama with his brothers and their mates it seems the Smith boys have married the Lewis sisters and they’re always fighting over something.  Waiting outside while they hash things out inside, Eggie spies the youngest sister, Darla Mae outside as well, shaking her head over the drama playing out between the mates inside.  Eggie is immediately smitten and follows Darla Mae out into the forest where he witnesses a few male figures hunting her.  Apparently, Darla Mae has brought trouble back with her from San Francisco, and Eggie makes it his mission to keep her safe.

As I said, Like a Wolf With a Bone had me cracking up.  The antics between the families were funny, just their names alone had me laughing: the Lewis sisters all had Mae as their middle name: Janie Mae, Roberta Mae, Janette Mae and so forth, and all were married/mated to the Smith brothers all with Ray as their middle names: Nicky Ray, Bubba Ray, Frankie Ray. You get the picture. At any rate it was fun seeing the Eggie and Darla Mae get to know each other, falling a little harder with every minute while settling in to his home and town, battling family and danger in the process. Their romance was hot!  Definitely want to read more from Ms. Laurenston.

4.5 Stars-Wed or Dead by Cynthia Eden

Cynthia Eden’s romantic suspense is always a thrill ride, and I can now say the same about her paranormal stories.  Kayla and Gage are on opposite sides, Kayla is a hunter of all paranormal entities, and Gage is a wolf-shifter, a powerful Alpha of his pack; so, you wouldn’t think they’d be getting married, yet as the story opens that’s exactly what’s playing out.

Oh, the chemistry between Kayla and Gage was sizzling! There’s obviously some mistrust between them when they each had secrets, but there was never a question that these two weren’t meant to be together.  Their secrets come out pretty much from the start and they each must deal with betrayals from each of their groups.  It was non-stop action, and when there wasn’t danger to deal with Kayla and Gage couldn’t keep their hands off each other!  Loved the story and the paranormal world set up, but I’m not sure if this book is part of another series Cynthia Eden writes. I see a potential for more stories here, and I’d like to read more!

Posted by Rachel @Waves of Fiction at 9:50 AM