Review: All's Fair in Love and Mastery by Sparrow Beckett 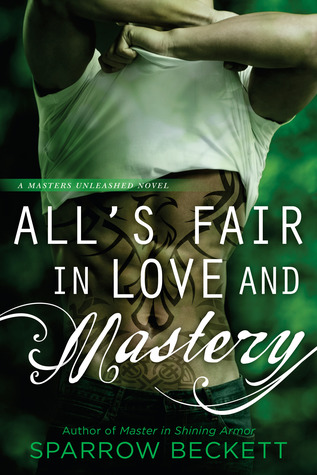 Grant Ellis, co-owner of the exclusive Catacombs club, can't stand Arabella Dexter...his own best friend. One scorching night shouldn't have made things weird between them, but it changed everything. Who knew there were lines friends can't uncross? Now, no one gets under his skin and drives him wild quite like Dex. Since she refuses to wear his collar, he can only mask his desire with sarcasm and antagonism.

Dex has had it up to here with Grant. He's a bossy, domineering jerk, and the sexiest man she's ever been with. Even so, she's done with collars and the nonsense that comes with commitments. When he extends an olive branch and invites her to visit his new resort on a remote island in Canada, it's a chance to get their friendship back on track.

Alone in the wilderness for a week, they explore Grant's investment and the boundaries of their relationship. Some bonfires can't be contained.

Grant’s fallen hard for Arabella, and fears what no-commitment sex would do to him if she decided to just move on.  Grant doesn’t know this is the reason behind Arabella’s rejection, and so he takes it personal.  Which is understandable. In fact, Grant has issues with thinking he’s unlovable, so this plays right into it.

I’m a sucker for best-friends-into-love romance, because it doesn’t take much to flip that switch when you have such a powerful bond.  Grant and Arabella had some insecurities they both had to work through, but they never shut each other completely out even when they got miffed at each other.