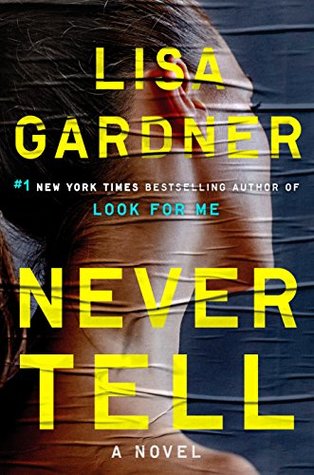 A man is dead, shot three times in his home office. But his computer has been shot twelve times, and when the cops arrive, his pregnant wife is holding the gun.

D.D. Warren arrives on the scene and recognizes the woman--Evie Carter--from a case many years back. Evie's father was killed in a shooting that was ruled an accident. But for D.D., two coincidental murders is too many.

Flora Dane sees the murder of Conrad Carter on the TV news and immediately knows his face. She remembers a night when she was still a victim--a hostage--and her captor knew this man. Overcome with guilt that she never tracked him down, Flora is now determined to learn the truth of Conrad's murder.

But D.D. and Flora are about to discover that in this case the truth is a devilishly elusive thing. As layer by layer they peel away the half-truths and outright lies, they wonder: How many secrets can one family have?

My Thoughts:
D.D. is called into a murder investigation, when they find out the suspect, Evie Carter was investigated sixteen years earlier for the shooting death of her father, ultimately ruled as accidental.  D.D. was on the case back then, but now that Evie is suspected in the shooting death of her husband, Conrad Carter, D.D. wonders if they were wrong about the first case. Was the death of Evie’s father really an accident?

Flora Dane becomes a key figure in the investigation when she realizes she met the murder victim, Evie’s husband, years before when he met up with her kidnapper, Jacob Ness, the man who held her for 472 days.  Flora is very much a survivor, six years after her release, and we’ve got to see her in action with the last couple of books, as sort of a vigilante and self-appointed victims advocate. Flora’s come a long way since her ordeal but seeing Conrad’s picture brings a lot back.  Flora has kept some of those memories locked away tight, refusing to hash and rehash the details over with the FBI, but now she questions if that’s deprived other possible victims of their justice. Flora is ready to revisit the past, but the FBI isn’t as generous sharing what they know of Jacob with her, so she finds another source: Keith Edgar, a true-crime buff who’s been requesting to interview Flora since she got away from Jacob. He’s a wealth of information and an expert in searching for more. But Flora’s also a bit skeptical about Keith, because what sort of man would devote so much of his free time to this kind of hobby? A groupie, a wannabe serial killer? Flora’s prepared for any possibility!

Since Flora’s been introduced, I’ve felt for her! Yes, she’s taken her life back, somewhat, but the story after a victim is “saved” makes it very apparent that the nightmare isn’t over just because they survived and got away.  With the introduction of Keith, I’m so excited for possibilities and the coming stories!  In acknowledgments Ms. Gardner states “there’s more to come” with Flora and I couldn’t be happier at the prospect! Her journey has been equal parts disturbing, moving and captivating!

Evie, our current murder suspect, gets a first-person point of view in this story, a POV I was happy to have since it connected her past with the present in a way that couldn’t have been otherwise.  Flora also gets a first-person POV. It was tough being in Flora’s head at first with all the past coming to the surface again, but there was a more hopeful Flora coming through and I loved it! D.D. gets her usual third person POV, which sounds a little odd, but it works.

I’ve been a long-time fan of Lisa Gardner’s stories! They’re a mixture of crime procedural, mystery, and thriller, heavy on character motivations and twists.  Even when I’ve been torn up about the outcome (just a couple of her books) it’s always been a memorable experience, one that I think about long after I finish the last page.

I know when a reader sees that this is the 10th book in a series they automatically shy away, but you don’t have to read all nine books before Never Tell to enjoy this installment.  This could be read as a standalone, but I’d recommend starting where Flora Dane is introduced in Find Her (book 8), to really enjoy Never Tell.

LISA GARDNER is the #1 New York Times bestselling author of seventeen previous novels, including her most recent, Crash & Burn. Her Detective D. D. Warren novels include Fear Nothing, Catch Me, Love You More, and The Neighbor, which won the International Thriller of the Year Award. She lives with her family in New England