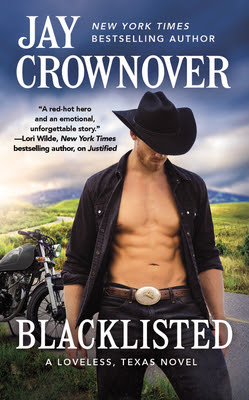 Blacklisted (Loveless, Texas #3) by Jay Crownover
Publication Date: October 27th 2020 by Forever
Pages: 384
Source: Publisher
Rating: ★★★★½
Links: Universal | Amazon | Goodreads
My Thoughts:
Blacklisted is the classic opposites attract kind of romance. Shot is the President of the local Motorcycle Club/Gang and Presley is a doctor for the State’s Medical Examiner’s office, assigned to investigate deaths, suspicious and otherwise. So, while Shot is on the murkier side of the law, Presley is sworn to uphold it, but the heart wants what the heart wants…
These two are thrown together when Presley is called out by her half sister to tend to Shot after a life threatening injury and neither can stop thinking about the other after the incident.  Presley has her own problems; a psycho trying to take Presley’s life apart because of a jealous obsession, and anyone close to Presley usually suffers blowback. The start of this played out in the last book, which is why I think it’s better to read the series in order. I guess in a pinch this would work as a standalone, too, but you’d miss the backstory of the Lawton’s, Presley’s newly discovered family, and the previous stories are really good!
I’ve been loving this series from the beginning, but I was super excited to get to Presley and Shot’s romance because I love the opposites attract troupe! Blacklisted did not disappoint. Presley and Shot had oodles of chemistry, and I was hooked into their little back and forth dance, mostly with Shot chasing and Presley trying to resist. So much fun! However, Presley’s psycho stalker, the things she pulls and then the question of when she would strike next kept me glued to the pages as well. I read the story in a 24-hour period, because I couldn’t put it down!
4.5 Suns

About the book:
From the New York Times bestselling author of the Marked Men series comes an irresistible and suspenseful romance between a doctor who plays by the rules and the outlaw who breaks them in order to protect her.
Dr. Presley Baskin has always lived a quiet, calm life. Unfortunately, nothing about her life in Loveless, Texas -- especially not the wild, rowdy, and impossibly close-knit Lawton family who've claimed her -- is quiet or calm. Which is how loner Presley finds herself roped into patching up local bad boy Shot Caldwell against her better judgment. Presley wants nothing to do with the dangerous, brooding leader of the local outlaw motorcycle club. But when someone starts stalking her, Shot is the only person she trusts to help. Plus he owes her one . . .
Palmer 'Shot' Caldwell has always known his life isn't made for relationships. At least until shy, secretive, Presley reluctantly pulled a bullet out of him. He's oddly protective of the pretty doctor, so when she comes to him for help, hard-hearted Shot suddenly realizes there's nothing he wouldn't do to keep her safe.
About Jay Crownover:
Jay Crownover is the international and multiple New York Times and USA Today bestselling author of the Marked Men Series, The Saints of Denver Series, The Point Series, Breaking Point Series, and the Getaway Series. Her books can be found translated in many different languages all around the world. She is a tattooed, crazy haired Colorado native who lives at the base of the Rockies with her awesome dogs. This is where she can frequently be found enjoying a cold beer and Taco Tuesdays. Jay is a self-declared music snob and outspoken book lover who is always looking for her next adventure, between the pages and on the road.
Connect with Jay Crownover:
Website | Facebook | Instagram | Goodreads | Reader Group
Posted by Rachel @Waves of Fiction at 12:00 AM