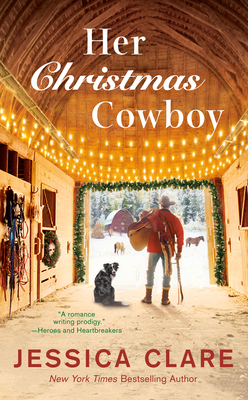 Her Christmas Cowboy (The Wyoming Cowboy #5) by Jessica Clare
Publication Date: October 13th 2020 by Berkley Books
Pages: 320
Source: Publisher
Rating: ★★★★½
Links: Amazon | Barnes & Noble | Kobo | Goodreads
My Thoughts:
Caleb Watson is the younger brother of Hank, from the previous romance, and we’re treated to his and Amy’s romance here in Her Christmas Cowboy. I loved every minute!

The minute Caleb laid eyes on Amy, Painted Barrel’s kindergarten teacher, Caleb knew she was the woman for him. Now if Caleb could ever get a sentence out that made sense, his dreams of being with Amy might come true. It seems every time he opens his mouth everything gets twisted up and he makes a fool of himself. However, Amy is pretty patient, and she seems to get that Caleb, like his brother Hank, has some issues interacting with people.

I’m loving Jessica Clare’s Wyoming Cowboy series, and the last couple of books with these shy cowboys from Alaska have melted my heart! I will say to have a little patience with Caleb and Amy’s romance because it does take some time before Caleb makes any headway. An assumption about some of Amy’s secret-admirer-gifts leads to a bit of confusion that pauses their progress, but I just adored these two together even when they got their signals crossed. Caleb is such a sweetheart, and Amy was a girl in need of a good man as the last one gave out Sleeping with the Enemy vibes! Yikes!

Now I’m dying to start the next Wyoming Cowboys story which centers on Jack Watson, the more outgoing, sort of ladies’ man of the brothers!

Caleb Watson has been crushing on elementary school teacher Amy Mckinney ever since he saw her. She's oblivious to his feelings--probably because he's never said a word to her. But when he learns Amy's going to be Mrs. Claus in the local Christmas celebration, he volunteers to be Santa so he'll finally have the chance to introduce himself. Even more than that, he'll use this opportunity to shower her with presents.

Amy's been receiving all kinds of Secret Santa gifts at work -- and she has no idea who her secret admirer is. She wishes he'd make himself known so they can go on a date, though, because being a newcomer in close-knit Painted Barrel, Wyoming, is pretty lonely. When her flaky landlord claims he's the gift giver...it's not quite the bachelor Amy had in mind. However, she's doubly shocked when gruff newcomer Caleb Watson crashes her date and insists he's really the one leaving her presents.

Amy's not sure what to think. Caleb's never indicated that he likes her, much less wants to date. Can he prove to Amy he's not just the perfect Santa to her Mrs. Claus, but the man of her dreams?