Review: Meet Me in Paradise by Libby Hubscher 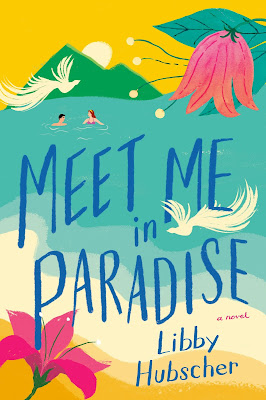 Meet Me in Paradise by Libby Hubscher
Publication Date: March 23rd 2021 by Berkley Books
Pages: 352
Source: Publisher
Rating: ★★★★★
Links: Amazon | Barnes & Noble | Kobo | Goodreads
My Thoughts:
Marin has been stuck in protective, safety mode since she lost her mother at the age of seventeen and had to be the adult for both her and her younger sister, Sadie. Marin’s sister took after their mother and is the risk taker, living life on the edge while traveling around the globe as a photojournalist. Marin hasn’t ever left the state.
Sadie invites Marin to take a trip with her to recharge. A sort of sister spa vacation and Marin can’t say no to her beloved sister the only family she has left.  Marin is forced to take her life out of the safe zone, have fun, and live life. Something she hasn’t done since her mother died.
Meet Me in Paradise is not the light, fluffy beach read it appears (from the cover) to be. It’s so much more. My emotions were all over the place! The story was at times funny, flirty, and silly, with outings of adventure that felt more like magical dates, but then it’d take a sharp turn into serious and heart wrenching! I must confess I sobbed! Ugly, snotty crying and I wasn’t expecting that at all! I don’t want to scare people, so know this: This romance junkie has a to have happy ending and I wasn’t disappointed but be prepared to break out the tissues!

Marin Cole has never:
Seen the ocean
Climbed a mountain
Taken a risk on love
....But if her sister's plan works, she just might do all three.

Ever since her journalist mother died on assignment, Marin has played it safe, refusing to set foot outside the state of Tennessee. Her wild-child younger sister, Sadie, has trotted the globe as a photographer, living off of art and adrenaline.

When Sadie returns from a tough assignment abroad and looks a little worse for wear, Marin reluctantly agrees to a sisters' spa weekend on the tropical island of Saba. But her lifelong fear of travel is affirmed when Sadie misses the flight, Marin's luggage gets mixed up with another passenger's, and an episode of turbulence sends her hurtling into the lap of Lucas Tsai, the handsome stranger who stole her sister's seat.

For the first time in a long time, Marin has to step outside of her comfort zone as she explores the island with Lucas and learns what she's been missing out on. With each breathtaking new experience, Marin gets closer to her real self, the man she's falling for, and the heart-wrenching truth about why she's there in the first place.