Review: Stuck on You by HeatherThurmeier 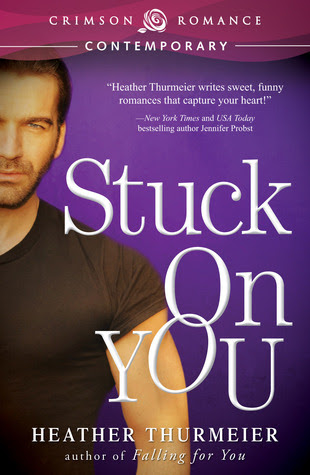 Stuck on You by Heather Thurmeier
Published on February 11, 2013 by Crimson Romance
Purchase: Amazon


About the book
If being forced to team up with reality TV’s favorite bad girl wasn’t enough, falling for her brother might just make this reality show a real nightmare.

Paige Anderson agrees to be on a new reality show called Treasure Trekkers, a show where contestants use handheld GPS units to find hidden caches filled with prizes, with her good friend Cassidy. But when Cassidy is unable to compete, Chip Cormack, the show’s producer, steps in with a last-minute replacement to be Paige’s partner—Zoe Oliver, reality TV’s favorite bad girl.

Jack Miles (aka Miles) is a mountain climber with the body to prove it. Miles convinced his climbing partner Ben to come on the show with him for one reason—to prove to Ben that they can still hike together, regardless of the fact that Ben lost his foot in a tragic accident. Miles isn’t about to let anything get in his way of winning—not even beautiful Paige.

But when Miles and Paige are thrown into an alliance with their teammates, working closely together leads to more than just good strategy. Can Paige steal Miles’ heart while surviving Zoe long enough to win the game?

My Thoughts:
Heather Thurmier definitely knows how to write amazing characters. Stuck on You is another hit in my opinion and it is one of the funniest books I have ever read.

When Paige was dumped on the reality show The One by Brad the bachelor she wasn’t sure what would be next for her. When the producers calls her with a tempting offer to join her best friend in a new adventure reality show she decides with a little hesitation that she will join in. Things take a turn when Cassidy her best friend can’t compete and her new partner ends up being the infamous mean girl Zoe from The One. It is not easy having Zoe for a partner and add to that the hunky mountain man in the competing team and her focus is all over the place. Filled with awesome humor, sizzling romance, and lots of adventure Stuck on You delivers a fun story.

I am quickly becoming addicted to these stories. I have to admit that I do watch a little bit of reality TV and reading about them is even more fun. Paige was such a fun character. I liked her in the first book Falling for You and it was so great to see her as the star in this one. She deserved a happy ever after. It wasn’t all roses though. I did get a little bit ticked at her when she blew up at Miles for something that she should have understood. I really thought she should have understood why he did what he did especially after he spilled his guts to her. I was so disappointed in her. I’m glad that things did eventually work out for her, but I thought that was a very poor moment for her. Miles was great and I was so glad he stuck to his guns time and time again. I was right there with him when he said she needed to loose the heels. Who hikes in spiked heels?! Beyond all that though their love story was so cute and very funny. I have so many passages bookmarked that just made me giggle and I enjoyed this new show that the author created.

I truly loved Miles and Paige even with her bad moment at the end but the shining star for me was Zoe. After reading Falling for You I was sure I hated her, but much to my surprise she is one of my favorite characters. I know the next book will be hers and I can’t wait to read it. I have a feeling it will be one of the best of the series. Zoe is hiding so much and I can’t wait to see it all spilled.