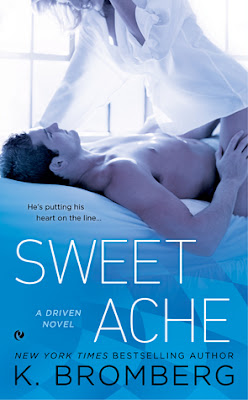 Hawkin Play, the bad boy rock star with a good guy heart, has lived a lifetime of cleaning up after his twin brother’s mistakes. Hunter’s most recent screw-up could land Hawke in jail and risk the band’s future. Hawke agrees to guest lecture at a local college to stay in the judge’s good graces—and a bet with his bandmate to seduce his sexy teaching assistant is icing on the cake.

Quinlan Westin is harder to bed than Hawke imagined. She knows his type and is determined to avoid the rocker at all costs—even if their attraction runs deeper than simple lust.

Just as Hawke might finally be winning over the girl, his brother has other plans. When Hunter realizes his twin finally has a weakness, he’ll stop at nothing to take advantage…

My Thoughts
This is my first experience with K. Bromberg, and I didn’t even know Sweet Ache was part of a series. It showed up on my Overdrive library, and I thought… Why not?? Well, it wasn’t quite what I thought it would be, and unfortunately turned out to be a bit disappointing.

Hawkin Play is the lead singer for his rock band, and dealing with a significant amount of turmoil in his life. Taking the hit for his twin brother’s drug charges, he agrees to take on a seminar at the local university to lessen the charges of his conviction. However, when the feisty, strong-willed teacher’s assistant walks into his class, he has no doubt he can make her fall for his charm. Taking on a bet with his band mate, he soon realizes it’s not going to be as easy as he thought.

I never really warmed up to Hawkin and Quinlan as a couple. Her combative nature was somewhat of a put-off for most of the first half of the novel. I realized that Hawk’s family issues were supposed to make me sympathize for this character, but I never really got there. The sex scenes were hot and heavy, but that seems to be the only thing this novel had going for it.

Overall, I struggled with this story that carried a very weak plot… making a bet to bed the teacher’s assistant within a month isn’t my idea of a profound or captivating story. Like I said, not quite what I expected and somewhat disappointing.
2 Suns