Review: Summer by the Sea by Susan Wiggs 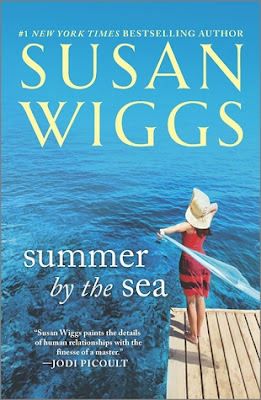 It's the beginning of another season in the seaside resort town of Winslow, Rhode Island, and Rosa Capoletti is given the chance to rediscover the pleasures of love and laughter, food and wine, friendship and romance…

With a little determination and a lot of charm, Rosa Capoletti took a run-down pizza joint and turned it into an award-winning restaurant that has been voted "best place to propose" three years in a row. For Rosa, though, there has been no real romance since her love affair with Alexander Montgomery ended suddenly and without explanation a decade ago.

But Rosa's life takes an unexpected turn when Alexander arrives back in town and asks for her help sorting through his late mother's affairs. Reunited at the beach house where they first met and fell in love, Rosa and Alexander discover that the secrets of the past are not what they seem. Now, with all that she wants right in front of her, Rosa searches for happiness with the man who once broke her heart -- and learns that in love, as in life, there are second chances.

My Thoughts
Summer by the Sea by Susan Wiggs is a perfect beach side read. This is my first novel by Wiggs and it turned out to be a pleasant surprise, so I was definitely glad I included it in my summer reading bundle.

In this novel, we meet Rosa Capoletti who is a successful restaurateur of Celesta by the Sea. It’s located in lovely beach town that has been Rosa’s home since she was born. As with most summer beach spots, the townies always seem to stand apart from the regular summer residents that occupy the country clubs and local stops. However, when Rosa was eighteen, she made the mistake of falling for Alexander Montgomery, which ended in heartbreak for Rosa.

Now, ten years later, Alex is back in town and hoping to rekindle a romance he mistakenly sacrificed for reasons that slowly unfold throughout the story.

I really enjoyed this second chance romance novel. It was exciting to uncover the backstory that included slow and steady drama that was never over the top. I enjoyed how Susan Wiggs slowly, but purposefully, exposed the events that led up to Rosa and Alex going their separate ways.

Overall Summer by the Sea was filled with characters I enjoyed meeting and a storyline that was the perfect backdrop for a beach side read. I enjoyed this one quite a bit!

P.S. The recipes in this novel sound amazing and simple to make. The book inspired me to give a few of them a try. I'm quickly becoming hooked on food fiction. YUM!
4 Suns