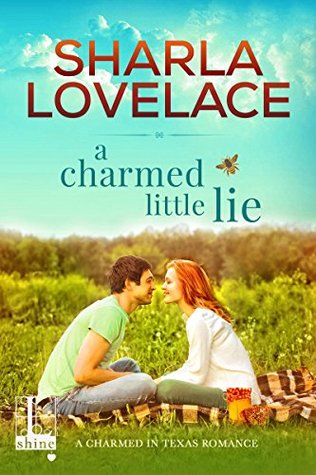 Charmed, Texas... quaint, quirky, and when it comes to romance, there's no place quite as enchanting.

Lanie Barrett didn't mean to lie. Spinning a story of a joyous marriage to make a dying woman happy is forgivable, isn't it? Lanie thinks so, especially since her beloved Aunt Ruby would have been heartbroken to know the truth of her niece's sadly loveless, short-of-sparkling existence. Trouble is, according to the will, Ruby didn't quite buy Lanie's tale. And to inherit the only house Lanie ever really considered a home, she'll have to bring her "husband" back to Charmed for three whole months--or watch Aunt Ruby's cozy nest go to her weasel cousin, who will sell it to a condo developer.

Nick McKane is out of work, out of luck, and the spitting image of the man Lanie described. He needs money for his daughter's art school tuition, and Lanie needs a convenient spouse. It's a match made... well, not quite in heaven, but for a temporary arrangement, it couldn't be better. Except the longer Lanie and Nick spend as husband and wife, the more the connection between them begins to seem real. Maybe this modern fairy tale really could come true...


My Thoughts:
According to her Aunt Ruby’s crazy will, Lanie needs to provide a valid marriage certificate (complete with husband) and they need to live together in her childhood home from three months in order to inherit.  Enter Nick, the oh-so-hot fry cook suddenly in need of some cash.  So Lanie and Nick end up in a fake marriage and tethered to each other for three months.  Their romance was a slow steady burn, fueled by “fake” displays of affection, and heated encounters!  But Nick and Lanie fell for more than just the physical person, they confided and leaned on each other, becoming close friends in the process.

Crazy ex’s on both sides lead to jealousy and the realization that their relationship is anything but fake. I love the way both Lanie and Nick reacted to some of the antics.  Pretty fun times.  I wasn’t so thrilled with Nick’s ex-wife.  I thought this would be a cute, fun, no-brainer small-town, country romance, and it was, but there was a bit more angst than I thought there would be.  That wasn’t a bad thing, Lanie’s intense emotions of hurt knifed right to my heart, and I really felt for her.  It made their happiness and romance all the sweeter.

This is my first Sharla Lovelace romance and I was pleasantly surprised by the depth of emotions I felt, especially since this wasn’t a very long book (241 pages according to GRs), one I read in one sitting.  There was a sneak peak at the end for Carmen’s romance: Lucky Charmed, and it sounds really good! Can’t wait!