Review: Undone by You by Kate Meader 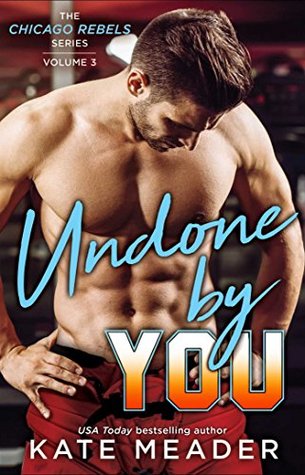 USA TODAY bestselling author Kate Meader brings her signature “steamy sex scenes, colorful characters, and riveting dialogue” (RT Book Reviews) to this novella in the Chicago Rebels series, following the general manager of the Rebels as he scores with one of his players off the ice.

Dante Moretti has just landed his dream job: GM of the Chicago Rebels. And screw the haters who think there should be an asterisk next to his name because he’s the first out managing executive in pro hockey. He’s earned the right to be here and nothing will topple him off that perch—especially not an incredibly inconvenient attraction to his star defenseman, Cade “Alamo” Burnett. Cade has always been careful to keep his own desires on the down low, but his hot Italian boss proves to be a temptation he can’t resist. Sure, they both have so much to lose, but no one will ever know...

As Dante and Cade’s taboo affair heats up off the ice and their relationship gets more and more intense, they’ll have to decide: is love worth risking their careers? Or is this romance destined to be forever benched?


My Thoughts:
I don’t read many m/m romances, but I love Kate Meader’s So Over You, the previous book in this series, I knew I wanted to give this a chance.  I was not disappointed.  Cade and Dante were smoking hot together, and this romance was full of steamy hookups, and tender moments.

Dante a retired NHL player and now the general manager of the Chicago Rebels, the team Cade plays in.  Dante finds Cade seriously hot, but completely off limits since first, he’s not gay and second, Cade’s his subordinate. When Dante is having a drink at a low key gay club, Cade shows up looking irresistible and Dante sees the vultures circling.  Of course, Dante’s going to step in, not because he doesn’t want anyone else having Cade (yeah, right, lol) but because this could be a PR nightmare for the team.

Cade hasn’t come out, but Dante is just too tempting to resist. Dante shows Cade the life he could have if he had the courage to come out, but he’s not sure it’s a risk he can take.  Also, coming out isn’t the only roadblock to their relationship, since Dante’s job could be on the line if they expose their affair.

This is a quick read with only about 147 pages, but Kate Meader manages to make it a fulfilling romance, with characters fully fleshed out, and very likable.  Yes, this is a romance that’ll make you hot and bothered with playful, sexy banter and sizzling sexy times, but one that made you care for the characters future happiness.

In between Dante and Cade’s romance we get a glimpse of Violet and Bren’s upcoming romance next in line, and I’m so looking forward to it! I do love a sexy Scot, so bring it on!