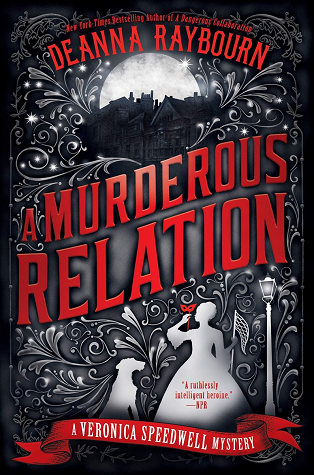 Veronica Speedwell and her natural historian colleague Stoker are asked by Lady Wellingtonia Beauclerk to help with a potential scandal so explosive it threatens to rock the monarchy. Prince Albert Victor is a regular visitor to the most exclusive private club in London, known as the Club de l'Etoile, and the proprietess, Madame Aurore, has received an expensive gift that can be traced back to the prince. Lady Wellie would like Veronica and Stoker to retrieve the jewel from the club before scandal can break.

Worse yet, London is gripped by hysteria in the autumn of 1888, terrorized by what would become the most notorious and elusive serial killer in history, Jack the Ripper--and Lady Wellie suspects the prince may be responsible.

My Thoughts:
Oh, I just loved this one! Since Veronica is being honest with her feelings for Stoker, and Stoker shows in every way that Veronica is it for him, I’m not stressing or feeling frustration over their romance. There was a sensual quality to one of the situations they find themselves in and the sexual tension between Stoker and Veronica was palpable at times! Loved it!

However, this one had me on the edge for different reasons. The situation Veronica and Stoker get into was dicey at times and I was worried at how they were going to get out of it! Thrills, suspense and a couple surprises.  I loved every minute! The murders by Jack the Ripper play a side part in the story and I enjoyed how Ms. Raybourn shone a light on the victims instead of making Jack the Ripper the focus as a majority of stories do.

I read this installment, but I’ve also listened to the audio versions in the past, and I have to say Angele Masters performance has been brilliant! She narrates this newest installment as well, so if you’re an audio lover you’re in for a treat!