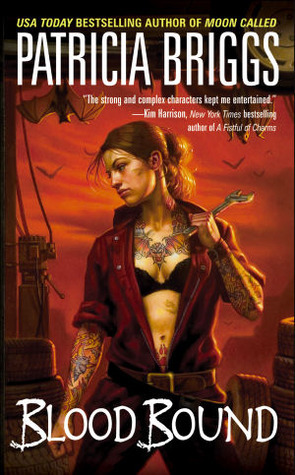 Mechanic Mercy Thompson has friends in low places - and in dark ones. And now she owes one of them a favor. Since she can shapeshift at will, she agrees to act as some extra muscle when her vampire friend Stefan goes to deliver a message to another of his kind.

But this new vampire is hardly ordinary - and neither is the demon inside of him.

So FYI, I originally read and posted this review while on another blog: The Readers Den, back in August of 2013, but as I participate in of Anne @Books of My Heart read-along & series giveaway (For info & giveaway click HERE). I thought I'd re-post my review and my re-read updates. I first re-read the entire series back in 2017 and I've just started my third re-read a couple of weeks ago. This series is so awesome and I can't recommend it more, so if you're at all interested join all of us in the read-along!

Blood Bound, the second installment in the Mercy Thompson series has me officially addicted!

This begins as Mercy’s friend, Stephan the vampire, calls in a favor owed. Little does she know that repayment puts her and the pack in grave danger, not something Stephan intended, either. What they stumble upon is a powerful threat that Mercy can’t let stand and before you know it, she’s waist high in dangerous vampire politics. Trying to distinguish the truth from subterfuge is difficult and vital if Mercy plans on staying alive.

Like most UF’s I’ve picked up, Mercy Thompson has a new mystery/problem to overcome with each book and also a continuing story arc that progresses, bit by bit in each installment. The new mystery is the vampire/sorcerer-crazy with massive amounts of power and wicked intent. There were parts of this story that genuinely made heart race from fear! Vampires are scary (and not sparkly), especially in the end!

I love Mercedes Thompson! She’s intelligent, a master of reading complicated situations and handling them with care. She reads between the lines and looks beyond the obvious, making her a force to be reckoned with.

The continuing arc is the romance, and it’s the part I love best! There is sort of a love triangle with Adam and Samuel in the mix, but not in an irritating way. Samuel has decided to stay in Washington, more specifically, with Mercy, when she’s made it clear she’s not interested. Samuel makes it clear he is. He was her first love but finding out exactly why he was interested her sent her running years ago. Highlight for spoiler: Mercy could bear his children, ones that would have the potential to be born werewolves, and therefore Samuel would have children he wouldn’t outlive. Finding out this was more a motivator than love broke Mercy’s heart at sixteen. End of spoiler. Now that Mercy looks back, though, she doesn’t regret the situation, because she realizes now that Samuel, as dominant as he is, would’ve wrapped her up in a protective cocoon and stifled her independent spirit.

Adam, the Alpha of the pack is domineering but still respects and appreciates Mercy for who she is rather than what she can do. He’s attracted to Mercy the woman, and isn’t looking for a pack brood mare. Mercy knew that Adam claimed her as his mate but thinks this was in name only, just for protection. A lone “walker” coyote like Mercy without protection would be a target for the wolves and probably wouldn’t last long. A few things happen that make it apparent that Adam’s “claim” has more power and sincerity behind it. This puts Mercy in a bind with Samuel back. Poor Mercy, *not* with two handsome, possessive, alpha males after her!

This was an exciting, and sometimes frightening read. Parts at the end gave me chills and goose bumps! I tried to force myself to put it aside just for my commutes. Something I wasn’t at all successful at! I’ve just finished book three: Iron Kissed, and I have to say the series just gets better!

I loved Lorelei King as the narrator. She has a warm, rich voice with a slightly sarcastic and humorous tone that I find perfect for Mercy. Her male voices are also quite good, as well, and the story flowed seamlessly because of it. I highly recommend the audio version!

Posted by Rachel @Waves of Fiction at 9:13 AM