A Stroke of Malice by Anna Lee Huber 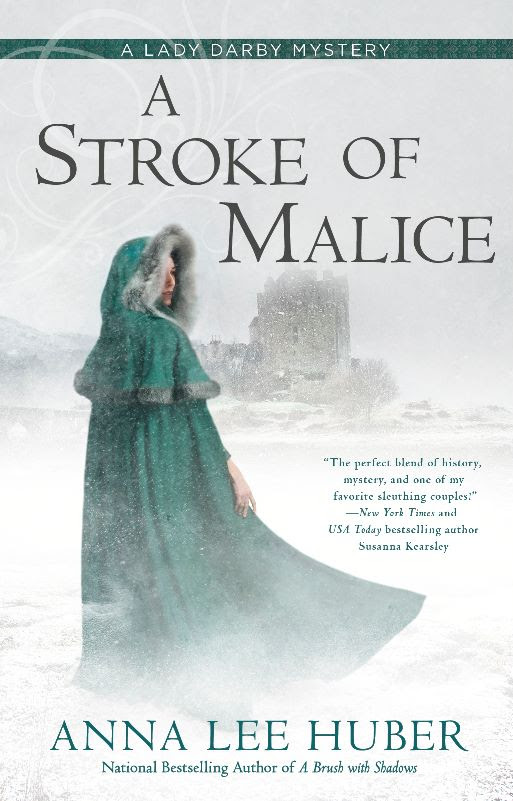 Lady Kiera Darby and her husband Sebastian Gage are looking forward to relaxing with new friends at an exciting yearly soiree, but they soon learn that murder never takes a holiday in the latest riveting installment in this national bestselling series.

Scotland 1832. After enjoying a delightful holiday with her family, Lady Kiera Darby is looking forward to finishing her new friend, the Duchess of Bowmont's portrait, as well as attending the duchess' annual Twelfth Night party. Though she normally avoids such fashionable events, Kiera trusts the attention will not be focused on her, but rather her notorious hostess and her family. But upon their arrival at the opulent Scottish estate, Kiera and her husband and fellow investigative partner, Sebastian Gage, swiftly deduce that all is not merry in the duke's household. The family appears to be under a great strain, and someone seems determined to cause mayhem among the guests with a series of forged notes.

However, matters swiftly turn from irksome to downright deadly when the merrymakers stumble upon a decomposing body in the castle's crypt. This corpse is certainly no laughing matter, especially when it is identified as the duchess' son-in-law, the Earl of Helmsdale, who had purportedly traveled to Paris more than a month earlier. It is evident the man met with foul play, and Kiera and Gage step in to investigate, at the duchess' insistence. Kiera and Gage must swiftly reexamine the facts, for a ruthless murderer walks among them and may well be a member of the duchess' own family. Kiera soon discovers just how deep the killer is willing to dig to keep their secrets from ever seeing the light of day.

My Thoughts:
I flew through the Lady Darby series last year after reading and loving Anna Lee Huber’s Verity Kent series.  Both are delightful! When we meet Lady Kiera Darby at the beginning of the series, she is a woman ostracized by society when they found out her late husband had her sketch the dead bodies he dissected for an anatomy journal he planned on publishing. At the time fresh bodies were hard to come by, not many would donate their body to science for this purpose, so medical colleges and people like Sir Darby resorted to buying corpses from questionable sources. It was later found out that some of these suppliers not only robbed fresh graves, but also murdered people to sell as dead medical subjects.  Kiera had no knowledge of this, and even if she did there wasn’t much she could’ve done about it since her husband was forcing her to comply by force and threats. He was an awful man, as we learn from Kiera’s memories, and so I was thrilled he died before we’re introduced to her.

This unwanted, unsolicited knowledge of anatomy as well as Kiera’s superb deductive skills make her valuable source of information to Gage, an inquiry agent tasked to solve a murder while staying at her sister’s estate.  In Kiera’s estimations, Gage is entirely too full of himself, and the rest, as they say, is history! Each installment tackles a new mystery, while at the center of the series is the relationship between Kiera and Gage. Ms. Huber masterfully created two wonderfully complex characters, faults and all, so of course their journey isn’t all smooth sailing, but I’ve loved every minute!

This is the eighth book in the series, so if you read on, you’re bound to get some spoilers.  If you’re planning on reading the series, which I totally recommend, I’d stop right here and go search for the first book! I highly recommend the audio version as Heather Wilds’ performance is perfection!

In Stroke of Malice Kiera and Gage are intent on relaxing, spending time with family while enjoying the festivities of a Twelfth Night Celebration at the Duchess of Beaumont’s estate in Scotland.  This is a happy time for Kiera and Gage, still newly married and expecting their first child. I adore these two together, settled and joyous in their situation! Unfortunately, the happy times are rudely interrupted by the discovery of a dead body in crypt. Gage and Kiera must find out the identity of the body as well as the murderer which is not made easy by the family or guests involved.

The mystery is wrapped up and solved, but as usual I’m left wanting the next story!