Review: Stages of the Heart by Jo Goodman 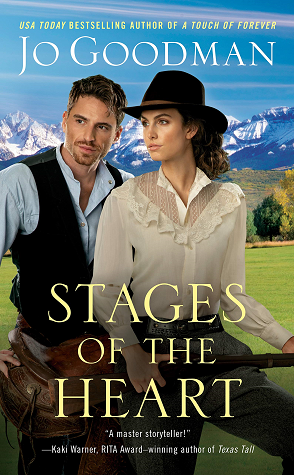 Love guides even the most cautious of hearts home as USA Today bestselling author Jo Goodman returns to the trails of the Colorado frontier.

Experience has taught Laurel to be suspicious of the men who pass through Morrison Station. She's been running the lucrative operation that connects Colorado's small frontier town of Falls Hollow with the stagecoach line since she inherited it from her father, and she's not about to let some wandering cowboy take over the reins. But newcomer McCall Landry isn't just any gunslinger. He seems to genuinely care for Laurel, and with his rugged good looks and mysterious past, he could be the one man to finally tempt her off track...

Call Landry doesn't expect much from Falls Hollow. He doesn't expect much from anything anymore. But Laurel Morrison took him by surprise when she put in a good word for him, a virtual stranger, after the stagecoach was robbed--and she keeps taking him by surprise. Charmed by her clever wit and fierce loyalty, Call finds himself falling hard. Now all he has to do is convince her he means to stay--in her bed, in her life, and in her heart.

My Thoughts:
Laurel Morrison is a strong, independent woman running Morrison Station, a stagecoach stop in route to the bigger Colorado town of Falls Hollow. Laurel’s been running things on her own since her father and brothers were murdered in a holdup eight years earlier, and she’s had to make plans since the coming railroad can make or break her station depending on which route the line decides to take.  Laurel has plans to sway the higher ups to take her route, but a payroll robbery at her station puts her station on shaky ground.  Enter McCall Landry.  He steps up to help the shorthanded stagecoach and becomes embroiled in the solving of this mystery.  No skin off his nose there, because it puts him right in the middle of Morrison Station, a place he fully intended on getting acquainted with after laying eyes on the beautiful and strong Laurel Morrison.

Stages of the Heart wasn’t really touted as a mystery, but is it is very much one getting to the bottom of the payroll theft and the dangers that come after. McCall proved himself to be an astute judge of character, and I was happy he was on the case especially since Laurel’s family station and reputation were at stake.  The partnership they forged trying to get to the bottom of this fueled the initial admiration and attraction felt between them, and even though there were some bumps in the road, these two were such a perfect couple! Their fun verbal sparring led to sparks, which led to more, and the inevitable was sizzling!

Jo Goodman’s writing was captivating; I just wanted to shut the doors, block out the world and immerse myself in the Old West where Laurel and McCall were making their way through the changing times.  She made these two come to life, their struggles, desires and joys coming through loud and clear, and easy to relate to.  I don’t know what Ms. Goodman’s plans are, but I hope there are more stories to come!

Posted by Rachel @Waves of Fiction at 9:57 PM