Review: Close Up by Amanda Quick 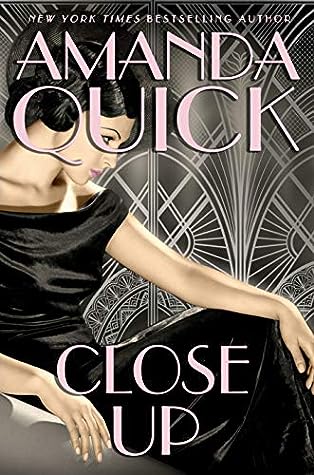 Vivian Brazier never thought life as an art photographer would include nightly wake-up calls to snap photos of grisly crime scenes or headshots for aspiring male actors. Although she is set on a career of transforming photography into a new art form, she knows her current work is what’s paying the bills.

After shooting crime scene photos of a famous actress, the latest victim of the murderer the press has dubbed the “Dagger Killer,” Vivian notices eerie similarities to the crime scenes of previous victims—details that only another photographer would have noticed—details that put Vivian at the top of the killer’s target list.

Nick Sundridge has always been able to “see” things that others don’t, coping with disturbing dreams and visions. His talent, or as he puts it—his curse—along with his dark past makes him a recluse, but a brilliant investigator. As the only one with the ability to help, Nick is sent to protect Vivian. Together, they discover the Dagger Killer has ties to the glitz and glamour of Hollywood royalty and high society. It is a cutthroat world of allure and deception that Vivian and Nick must traverse—all in order to uncover the killer who will stop at nothing to add them to their gallery of murders.

My Thoughts:
Vivian Brazier was born to a wealthy, well-connected family, and left a life of luxury to pursue her dreams of becoming a photographic artist.  Her parents were not pleased with her decision so she’s on her own trying to make her way in the coastal town of Adelina Beach in California. To supplement her income Vivian snaps photos of crime scenes, and one in particular sets her on edge: the victims of the Dagger Killer. This killer poses the victims is such a way that makes Vivian think this murderer has a background in photography.  As if this isn’t strange enough Nick Sundridge, a private investigator, shows up on her door saying he’s been hired to be her bodyguard after information comes out that names Vivian as the target of a deranged killer.

I’ve really enjoyed the Burning Cove series! Set in the 1930s on the California Pacific Coast, Burning Cove is a resort/hotel that caters to the rich and famous. It’s a town described with the beauty of Big Sur or Carmel: cliffs with breathtaking views of the Pacific with the added enticing feel of Old Hollywood.

I loved Vivian! She was a strong, clever woman, and she never seemed to let life’s setbacks get her down or derail her from her goals.  Nick and Vivian’s chemistry was palpable from their first meet, and of course working together closely their romance turns from attraction to more quickly.

The initial call to Vivian’s aid was made in conjunction with a supernatural lead, and I liked this bit of paranormal element added to the story. The mystery kept me guessing until the end, keeping my attention firmly focused on the story unfolding!

Close Up is the fourth installment in the Burning Cove series, but you don’t have to read the previous stories to enjoy it.  Each book is a separate mystery/romance that wraps up nicely. I’ve read several books by Amanda Quick (aka Jayne Ann Krentz) and this is my favorite series by her.

Posted by Rachel @Waves of Fiction at 8:09 AM