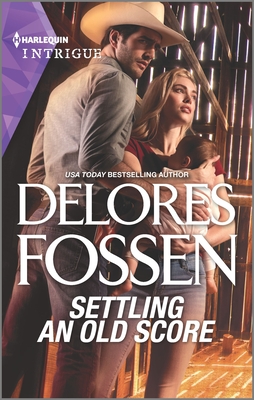 From USA TODAY bestselling author Delores Fossen, comes the next instalment of the Longview Ridge Ranch series featuring no-nonsense cowboy brothers in law enforcement.
A past tragedy destroyed their love. A vulnerable newborn brings them back together.
Within moments of discovering a baby on his doorstep, Texas Ranger Eli Slater finds himself being held at gunpoint by his ex, Ashlyn Darrow. She claims she was tipped off that the still-gorgeous cowboy kidnapped her newly adopted daughter because of the bad blood that defines their past. They quickly realize Eli’s been set up and now Eli is determined to protect Ashlyn and her daughter. But regaining her trust will be as easy as ignoring the attraction even a lifetime apart can’t erase…
From Harlequin Intrigue: Seek thrills. Solve crimes. Justice served.

My Thoughts:
Texas Ranger Eli has a shock when his old flame, Ashlyn, shows up in the middle of the night accusing him of kidnapping her infant daughter. That accusation is quickly thrown aside when shots are fired, and they realize they must band together to ferret out their mutual threat.  There are several suspects on their list but is seems likely that it’s someone involved with the murder of Ashlyn’s best friend, Marta, three years earlier.

Ashlyn and Eli have a troubled history. Once young and in love, but life separated them, and they went their separate ways. However, they meet again under tragic circumstances ending with Ashlyn being shot and her friend murdered. Ashlyn blames Eli for that night, but since spending time together again she realizes it was unfair to hold him responsible.

Old feelings of attraction resurface as they fight off every new assault. Eli had a protective streak a mile long, and he was determined to protect Ashlyn and her newly adopted daughter, Cora. As their feelings spark again, he’s also determined to not let their second chance at happiness get away.

Settling an Old Score was packed full of action and danger from the get-go and hardly let up! It was a fun combination of danger, thrills, and romance, and I was pulled into the story right away. There were several suspects, and I wasn’t sure which was the real culprit until the end. I will say I did feel like I was missing some of the story, the whole night of Marta’s death and Ashlyn’s injury is alluded to, but not fully explained. Like it was maybe some of it took place in a previous book? Still, the story was a quick and entertaining escape from reality!