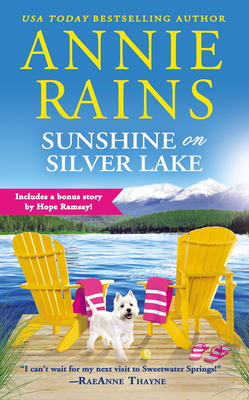 Welcome back to Sweetwater Springs, North Carolina for a heartwarming second-chance romance between a quirky café owner and a handsome park ranger.
With summer just around the corner, Emma St. James is eagerly planning a 5K run at Sweetwater Springs National Park. But first she needs the help of one charming, rugged, and handsome park ranger. Her brief high school romance with Jack Hershey may have ended in heartbreak, but Emma can't deny that he still gives her butterflies. So when Jack responds to her request with an all-too-tempting plea to pretend to be his girlfriend for the summer, how can she say no?

Jack would do anything for his sister -- even pretend to give up his bachelor life to care for his nephew. Passing his days with his high school sweetheart guarantees one long, hot summer -- but only because every moment together leaves him wanting a real relationship. He can't imagine spending another season without Emma by his side. Can he convince her to give their love a second chance before the summer draws to a close?

My Thoughts:
Emma St. James has just turned thirty, the age she lost her mother to cancer, and it’s brought back the feelings of grief, and fears she might be next. Finding out that her mother wanted to organize a 5K race to benefit a good cause but never got the chance gives Emma a way to honor her memory. Now she just needs to be fit into the busy calendar of their nature park. For that she needs the help of the one man who broke her heart prom night, Jack Hershey. Emma’s in luck though, because Jack needs a favor from her, too. He needs her to be his girlfriend for the Summer. Pretend, of course.  Well, that’s what they tell themselves at first, and you know how the story goes…

Jack did let Emma down prom night, but not because he didn’t care or wasn’t interested. Jack has had his own struggle. One he has control of, but doesn’t like to advertize.

When I figured out Emma’s emotional turmoil was over being the same age as her mother when she died of cancer and was avoiding her medical checkup, I almost stopped reading. My mother died of cancer at the age of forty-two and because of that I’ve had to go in often; for many years I was terrified that I’d have the same fate. So, I was worried it’d be tough reading this, however the author did a wonderful job handling the subject, and while this was a plot point it was presented in a way that didn’t stress me out and didn’t overtake the story.

Emma’s feelings were so very relatable because I’ve felt exactly like her. I enjoyed how she came to terms with her situation and took control. Fear does nothing, knowledge and a plan of action is empowering and comforting. I just really connected to Emma on a lot of levels. Even got her reactions to her father’s remarriage!

Sunshine on Silver Lake was very much a happy romance, despite dealing with some heavier issues like cancer and alcoholism. I loved seeing Emma and Jack fall for each other instead of longing from afar like they had for years. Jack was such a sweetheart, patient, and kind. He really had no idea Emma still carried a torch for him and got a bit swoony over every chocolate kiss gifted (it’s his thing since Hershey’s his last name) and really who wouldn’t?

This is book five in the series, but it’s not necessary to read the previous books before diving in.

Posted by Rachel @Waves of Fiction at 9:50 PM