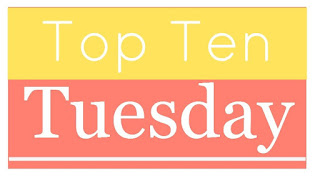 Top Ten Tuesday is a meme hosted by The Artsy Reader where each week they post a new top ten list and ask fellow bookish folk to share their lists on that topic.

This weeks topic is Books That Make Me Smile, and I'm taking that a step further and making it Books That Made Me Laugh:

Carolyn Brown's books always make me laugh, but this was the funniest to date for me. Aunt Tansy with her "psychic powers" and her "inspirational bird", Dakshani had me in stitches!

Oh, Jake and the six McQuaid kids were priceless!

Ilona Andrews never fails to inject some humor in their reads. Ascanio provides many a laugh with his take on the "bunnycats" (sooo cute) and his commentary ("a mutant equine of unknown origin") on Kate's mammoth donkey, Cuddles. Desandra made me laugh a lot, too!

Sean's comments about Dina Shih Tzu, Beast, were hilarious, but there was so much more!

Joy Nash's narration, which made a funny story even funnier! Jennifer and Cletus' romance had me laughing out loud in so many parts!

Beautiful writing and story, but that bicycle scene had me in tears I laughed soooo hard!

Melina Marchetta's writing is so gorgeous, and Saving Francesca dealt with heavier issues such as depression, but it was not a depressing book, and was actually hilarious in parts! Tara's list of demands, too funny!


The Wall of Winnipeg and Me by Mariana Zapata:

This was my first Mariana Zapata and still my favorite. Sooo sooo good and so funny!

A close 2nd to my favorite. I laughed at Sal's nicknames for Kulti, especially since he was such an ass at first!

The Wallflower Wager by Tessa Dare:

My favorite of the Girl Meets Duke series! Penelope and her brood of animals had me dying! Delilah the talking parrot: "Fancy a f*ck love?" said at the worst times ever, had me laughing my head off! Marigold the "non-breeding goat" and of course Penelope's attempts at vegetarian cooking: Sham!!

What's books made you smile/laugh?