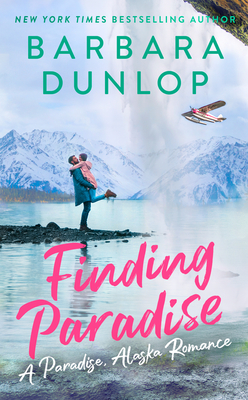 Finding Paradise (Paradise, Alaska #2) by Barbara Dunlop
Publication Date: November 30th 2021 by Berkley
Pages: 336
Source: Publisher
Rating: ★★★★
Links: Amazon | Barnes & Noble | Kobo | Goodreads
My Thoughts:
Marnie is helping Mia (the heroine from the last book) organize the matchmaking trip for Los Angeles women tired of the local dating scene to the men in Paradise, Alaska. Marnie isn’t looking for a husband and is fond of city living so she wasn’t planning on going with the group. However, last minute the women push for her to come along seeing as she helped put everything together and before you know it Marnie’s in Alaska.
Conrad “Cobra” Stanton, Aircraft Maintenance Engineer for West Slope Aviation, isn’t buying into this matchmaking business and so plans to stay far away from all the dinners and activities. However, it’s hard to stay completely away in such a small town and Marnie catches his eye at every turn. Especially when she surprises him with skills he wouldn’t attribute to an LA lawyer.
I love the thought of leaving the big city behind and moving somewhere remote and beautiful, but this didn’t appeal to Marnie so she didn’t want to get into a romance, yet she couldn’t help her attraction to Cobra. They end up drawn to each other over and over. Attraction leads to lusty kisses and more, but neither want to give up their place in life.
Even though I hate the big city I could understand why Marnie wouldn’t just want to leave after working so hard to become a successful attorney. Especially after her past and all she had to overcome is revealed. Same with Cobra, he was doing what he loved in a beautiful, pristine place. Both were relatable situations.  This is a romance, though, so I knew they’d figure things out somehow. I like how they appreciated and supported each other, and I was eager for them to find a way to make their relationship permanent. Even though there were a couple of bumps in the road I enjoyed every minute!
I loved the time spent in Alaska, the activities sounded like a lot of fun and featured the best parts of being out in Alaska. At least, I think so! I’ve never been, but I’d like to go even more so after reading this story. A perfect romance for someone who craves an escape and a change of scenery!
4 Stars

Accomplished Los Angeles lawyer Marnie Anton has always been sensible, but when her friend Mia Westberg asks for help with a ridiculous matchmaking project, she can't say no. The idea of transporting city girls into the small town of Paradise, Alaska, is so crazy it just might...work? Against her best judgment, she tags along. Having grown up in a family of intimidating men, Marnie developed a preference for the urbane lawyers and clients in her life in LA. But when she meets a mountain of a buff Alaskan man with an intriguing snake tattoo, intimidated is definitely not the first thing she feels.

Conrad Cobra Stanford was skeptical of the matchmaking event from the start. Big-city women weren't adventurous, they were judgmental. They'd take one look at him and scorn his lifestyle, just like his first love did. Cobra planned to give the women a wide berth, but one of them won't be ignored. Marnie's everything that's wrong and everything that's right for him all at the same time. Just when he thinks he's got her pegged, she blindsides him with a startling past, falling into his arms and igniting his protective instincts and so much more....