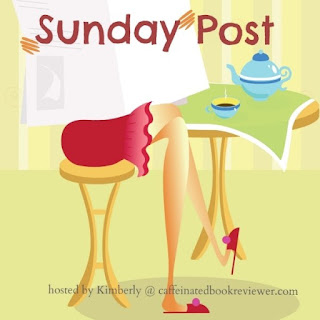 The Sunday Post is hosted by Kimberly @ Caffeinated reviewer book blog, and is a post to recap my bookish and non-bookish things from the last week.
We've had cold temps with the highs in the upper 40s and quite a bit of rain. We were worried about snow so I stocked up on a lot of food items and we bought 2 cords of wood so if the power went out we'd have plenty of wood. We have a generator that is hooked up to our propane tank that can power the whole house, but it's nice to have other ways to heat the house. We have our woodstove burning most evenings.  Apparently, last winter they had a bad storm here that knocked the power out for 2 weeks! So I wanted to be prepared, but we've only had rain so far.
It was 27 degrees (Fahrenheit) when I left for work on Tuesday and 29 when I left on Friday, but as it wasn't raining I was just worried about ice on the roads. I drove really slow and didn't accelerate or brake quickly. Everything is covered in white frost when I wake up most days except today since it was a little warmer. It's been raining most of the day, still raining now.
Went and got my haircut and had to drive 45 minutes as my hairdresser moved from the shop I was going to which was only 25 minutes away from me. Her new place is really nice, but I was happy my hubby came along and drove (he dropped me off and went to Home Depot) because it rained pretty heavy the whole way there and back.
It's so hard to find someone you like for hair and even more so up here because it's smaller towns so I'll probably keep going to her even though it's a longer drive. My sister said she'll probably start looking on Yelp again. We go to the same hair dresser.
Read:
Click on cover for Goodreads link

Two review books and two non-review. I enjoyed all of them. Catch Her in a Lie was a really short audio. 59 minutes on 1.5x speed. Entertaining little mystery for the car ride today. These Silent Woods was kind of riveting! Bronson Pinchot's audio performance was so good! A Very Merry Bromance was a fun grump vs. sunshine romance with the female as the grump for a change. I enjoyed Flirting With the Beast and it featured a mature couple (later 50s) which was nice for a change. I like to read about older characters finding happiness. I think you're never too old to enjoy life.
Received/Purchased/Library Lend:

Buried in a Good Book was an audio deal from Chirp. I just checked and it's still $1.99. I bought it after seeing Wendy's review of the second installment. Love the Pacific Northwest so I love reading books set there. Looking forward to all of these new additions.
Instagram:
I'm giving away a paperback copy of A Very Merry Bromance HERE.

How was your week?
Posted by Rachel @Waves of Fiction at 9:28 PM