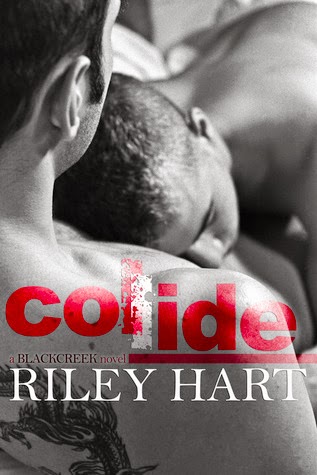 At ten years old, Noah Jameson and Cooper Bradshaw collided mid-air when they dove for the same football. For three years, they were inseparable…until one day when Noah and his parents disappeared in the middle of the night.

Noah and Cooper never knew what happened to each other. Now, seventeen years later, after finding his boyfriend in bed with another man, Noah returns to Blackcreek looking for a fresh start. And damned if he doesn't find his old friend grew up to be sexy as sin. Coop can’t believe Noah—the only person he trusted with the guilt over his parents’ death—is back. And gay… Or that Cooper himself suddenly wants another man in his bed for the first time.


There’s no denying the attraction and emotion between them, but can they overcome the ghosts of their pasts to have a future together?


This title contains two strong, sexy men, and a passionate friendship that transforms into a sizzling hot romance.

My Thoughts
When Noah returns to his hometown of Blackcreek, Colorado, the last thing he thought was that he’d be colliding into his childhood friend Cooper Bradshaw – and we’re talking full on collision. On his first day back, his longtime buddy that he hasn’t seen for over seventeen years rams him down with his truck. When Cooper takes Noah to the hospital and later back to his house to help him recuperate, these two begin to reshape their long lost friendship. However, when Cooper learns that Noah is gay he struggles to come to grips with his feelings and a steady flow of confusion has him rethinking how he feels about Noah.

This story had it’s ups and downs, and sadly what I think I struggled most with when reading Collide, was how the author expressed herself throughout the book. I feel I’ve read enough books in this genre to know that the one thing I appreciate more than one hot guy being smexy is TWO. However, something just didn’t quite click for me and I feel a bit let down by the potential of this story.

How I felt about the writing, didn’t take away from my deep like for the characters though, which was strange because when I can’t fall into the cadence of a story, there’s a good chance I won’t establish a connection with the characters. However that wasn’t the case at all. With Collide, I really came to like Noah and Cooper, but I just didn’t care for how their story was told. Yeah, I know... I know... I’m confused too, so I’ll just stop there. Overall, I feel conflicted about this story, so I’m moving on...
3 Suns