Review: Into This River I Drown by T.J. Klune 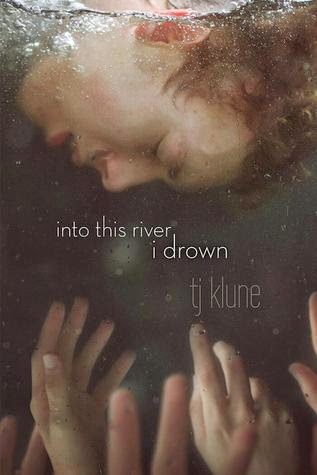 Into This River I Drown by T.J. Klune
Published March 25th 2013 by Dreamspinner Press

Five years ago, Benji Green lost his beloved father, Big Eddie, who drowned when his truck crashed into a river. All called it an accident, but Benji thought it more. However, even years later, he is buried deep in his grief, throwing himself into taking over Big Eddie's convenience store in the small town of Roseland, Oregon. Surrounded by his mother and three aunts, he lives day by day, struggling to keep his head above water.

But Roseland is no ordinary place.

With ever-increasing dreams of his father's death and waking visions of feathers on the surface of a river, Benji's definition of reality is starting to bend. He thinks himself haunted, but whether by ghosts or memories, he can no longer tell. It's not until the impossible happens and a man falls from the sky and leaves the burning imprint of wings on the ground that he begins to understand that the world around him is more mysterious than he could have possibly imagined. It's also more dangerous, as forces beyond anyone's control are descending on Roseland, revealing long hidden truths about friends, family, and the man named Calliel who Benji is finding he can no longer live without.

65% DNF
I’m not sure where I went wrong with this one. I was so excited to jump into this book based on the amazing reviews. I’m talking consistent 5 star after 5 star ratings. Also, I’ve heard great things about T.J. Klune, and I just wanted to experience the magic this author is claimed with delivering firsthand.

Unfortunately… after five days of truly working hard at getting through this book, I’ve decided to give up well passed the half mark. I think that’s a fair decision considering that I just wasn’t making that connection with the characters and story that I was hoping to make. The writing is deep and emotional, and I won’t even attempt to minimize that aspect of the book. The pain of Benji losing his father is visceral and very well portrayed. However, I felt that the story was on constant repeat, and I wasn’t making much progress. I kept reading about the night Big Eddie died, the pain and anger Benji was experiencing, the fact Cal traded in his guardian angel status to save/help Benji… it was shared over and over again and even when I started to skim paragraphs at a time, I finally concluded it was just too over-baked for my taste.

I’ve been known to struggle with fallen angel stories, and to be honest I didn’t even think about that aspect of the novel going in. So when I stumbled upon Cal, I had mixed emotions. This character was a great blend of volatile, gentle, and all around easy to like. However, pair this angel with a man that is truly suffering from the loss of this father and they begin to engage in a romantic relationship, I just didn’t quite know how to process that. It felt odd for lack of a better word.

Overall, I think I just wasn’t the right audience for this story. However, if you take a moment to review the amazing feedback other readers had, it’s quite clear that I’m the one missing the mark here and that’s okay. Sometimes that happens. I’ve been looking forward to starting another book for a few days now, and I think I might do that. Moving on…
1 Sun

Email ThisBlogThis!Share to TwitterShare to FacebookShare to Pinterest
Labels: 1 sun, arlene's review, into this river i drown, t.j. klune