Review: Since You've Been Gone by Anouska Knight 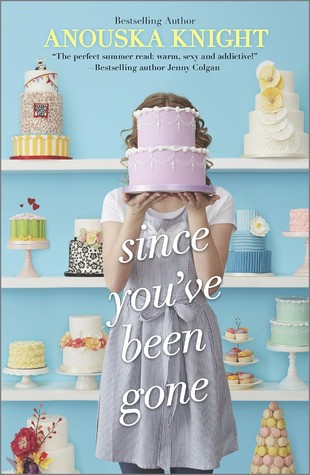 How do you learn to love again?

In one tragic moment, Holly Jefferson s life as she knows it changes for ever. Now to the external world, at least she s finally getting back on her feet, running her business, Cake. Then she meets Ciaran Argyll.

His rich and charmed life feels a million miles from her own. However, there s more to Ciaran than the superficial world that surrounds him, and he too is wrestling with his own ghosts. Will Holly find the missing ingredient that allows her to live again and embrace an unknown and unexpected tomorrow?

Since You’ve Been Gone seemed like it would be a sweet romance, unfortunately, I wasn’t blown away.

Holly’s life is basically on autopilot the last two years, since her husband was killed. She still has dreams of her husband’s presence, vivid in longing.  Holly owns a bakery and does a steady business, and she’s close to her sister who is about to give birth, but as far as moving on that’s quite another matter. A cake delivery to a posh estate/castle is about to change all of that. This is where she meets Ciaran Argyll, the rich son of property mogul, Fergal Argyll.  Soon, last minute, high priced cake orders start coming into her shop.  Ciaran also starts popping up everywhere and Holly doesn’t know how to handle the unexpected and unwanted attraction she feels for him.  He’s the last person she wants to fall for, a seemingly spoiled (according to her prejudices) playboy with details of short lived romances splashed all over the gossip pages.  However, Ciaran just won’t go away.

I had high hopes for Since You’ve Been Gone. On paper this is exactly my type of story.  I love a multilayered romance with a quirky secondary cast, but this failed to meet my expectations. I did enjoy parts of the story, but my overall feeling at finishing was disappointment.  Holly’s constant pushing and judgmental attitude towards Ciaran rubbed me the wrong way.  It seemed like he was genuinely trying to help her out and Holly was suspicious and insulted at his efforts.  Plus, it seems like she was ready and willing to believe the worst about him at every turn.  I also had issues with what went down at the very end with Ciaran’s father and his ex-fiance! I had a hard time believing that his father just got through extolling his son’s value and saying how thankful he was that Ciaran kept it together for the years he was falling apart, and then that happened! It felt like it came out of left field and then was just swept under the rug.  It seems Ciaran had no issues with his father’s behavior and everyone was a happy united family by the end.  I felt that was hard to believe given how much his ex-fiancé had hurt Ciaran.

I’ve been in the midst of a reading slump so maybe this has some bearing on my reactions, and I even have a friend who enjoyed this book immensely; so take a look at the other reviews before dismissing this story altogether.