Review: Finding Eden (A Sign of Love) by Mia Sheridan 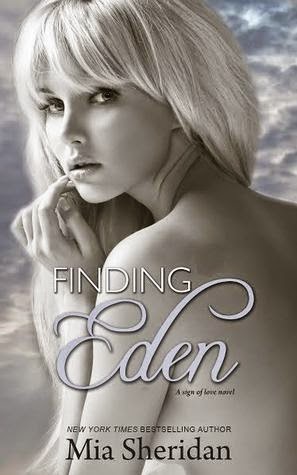 Finding Eden (A Sign of Love) by Mia Sheridan

Finding Eden is the continuation, and conclusion, to Becoming Calder.

When the world as you know it has ended, when all that you love has been washed away, where do you find strength?


When the new world you've stepped into is as isolating as the last, when your heart is broken, and your future is unclear, where do you find hope?


Finding Eden is a story of strength, discovery, forgiveness, and undying love. It is about believing in your destiny and following the path that leads to peace.

THIS IS THE SECOND PART, AND CONCLUSION, IN A TWO-PARTSIGN OF LOVE SERIES INSPIRED BY AQUARIUS (BECOMING CALDER SHOULD BE READ FIRST). New Adult Contemporary Romance: Due to strong language and graphic sexual content, this book is not intended for readers under the age of 18.


“…everyone deserves a love story that doesn’t hurt.”
Amazing conclusion to Calder and Eden’s novel. From the beginning, this couple captured my heart and shared a breathtakingly emotional story that was filled with not only tragic and horrifying events, but also moments of beauty that proved they were determined to live like survivors rather than victims.

In Finding Eden, we continue on to part two of Calder and Eden’s A Sign of Lovestory where they’ve escaped the horrifying events of the cult they lived in for most of their lives. The world they knew came to a horrifically tragic ending when hundreds of their family and friends die in a mass suicide/murder in their secluded community of Acadia. After the event, both Calder and Eden survive but they don’t know that the other made it out alive. They spend the next three years trying to come to grips with all that they have lost.

Calder and Eden each find a way to manage in this new world that is foreign to them through the help of friends and acquaintances. When Eden is reunited with her mother and cousin, she begins to build a life with the family she thought she’d never see again. Life continues to take sharp turns for this character when she finally comes face to face with Calder and together they are forced to once again re-live the events of Acadia. As they rekindle the love that began in Acadia, they are forced to find strength in each other to survive the nightmare of their past..

Overall, I have to say that Mia Sheridan is a gifted story-teller. I’ve never read such a gripping story that involves cult-like communities that result in massive tragedy. Sheridan did a masterful job of making us fall in love with her characters and feel every emotion they struggled with as they faced their nightmares and attempted to rebuild their lives.

Calder’s backstory was heartbreaking, and it made me sympathize with this character even more then I already did from the moment I met him. His incredible strength and ability to love was powerful. He definitely commanded the story with his presence. Eden was a perfect match for Calder. Together they shared their weaknesses, hopes and most of all ability to love and attempt to move on. As a couple, their story felt both tragic, yet hopeful. Great combination!

The secondary cast was amazing! I wanted to read more about Xander, Nikki and Molly as we only scratched the surface to what I believe are some possibly great backstories.

The conclusion to A Sign of Love was skillfully crafted. Despite the horrific events that took place, Calder and Eden proved that they deserved a hopeful ending. Well done!
5 Suns