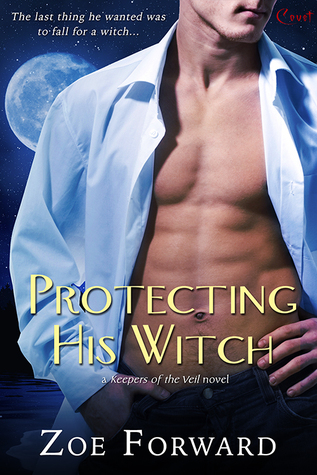 Protecting His Witch (A Keepers of the Veil novella) by Zoe Forward
Published by Entangeld: Covet on October 27, 2014
Purchase: Amazon


The last thing he wanted was to fall for a witch...

Veterinarian Kat Ramsey hasn't a clue that she's a witch. Sure, she can read minds, and there's the whole “dimension-hopping” issue that she can't quite control, but Kat is determined to keep things normal. That is, until she accidentally hops into the Otherworld, and runs smack into Matthew Ryan–the seriously hot one-night stand from years ago who shoved her out of his dorm. Naked.

And there's the tiny matter of the curse she gave him.

May you never find satisfaction with another woman. Billionaire and former druid Matthew Ryan hasn't forgotten the curse, or the witch who gave it to him. Kat's unexpected return means the curse will finally be broken. Unfortunately, his libido has other ideas–like how to get her back into his bed one last time. But far more worrying is his suspicion that Kat is the seventh Pleiades witch. Because while he's turned his back on his druidic ways, he's still bound to protect the woman who made his life hell...

My Thoughts:
I have been a long term fan of Ms. Forward and I was super excited to dive into her newest series.  Protecting His Witch is everything the Covet imprint is known for.  Off the charts sexiness, gorgeous alpha male, and a female heroine who can hold her own.

Paranormal isn't a new venture for Ms. Forward, but the introduction of the Pleiades is and I was really intrigued with this myth.  Kat has no idea why or how she can "dimension hop".  She finds herself always falling right into Matt Ryan's hands and that isn't exactly a bad place to be.  That is until she finds out he is a lying cheater.  When a chance encounter brings them together again Kat and Matt both realize that there might be more to their bump ins and fate might have bigger things in store for them.

Matt and Kat were great characters.  I really enjoyed reading their story and it was with minimal drama which I am all about these days.  There was a few angsty moments, but for the most part they both wanted each other and showed it.  Their interactions were really steamy and fun.  Matt always seemed to be caught in a bad situation and it took me awhile, but I did eventually root for him.  He was what Kat needed and I thought he did an awesome job when he finally came around.  I also really enjoyed the storyline.

This is my first Druid/ Pleiades story and I can tell you it won't be my last.  The story really came alive for me at the end though when a lot of my questions were answered.  I found throughout most of the story I was a little lost and I didn't understand the dimension hopping aspect.  I honestly still don't so I wish the author would have developed this a bit more.  It would have been nice to see more world building in general too.  I think I would have loved this world had I gotten more explanation.  The ending did reveal quite a few answers, but I still have a lot of questions and I am hoping that this will turn into a series and get some answers.  I don't like feeling lost, but the characters were pretty great so I went with the story for them.

One thing I really liked though was the surprises that were thrown in.  With these types of stories not much surprises me but man Ms. Forward really threw some doozies out there.  There are 2 that really grabbed me and I won't lie I was floored with both.  I am a little shocked at how future situations were handled when one particular bomb was dropped.  I would have thought that Kat would have been a little more aware of certain possibilities, but I guess in the moment logic sometimes fails us.

So all in all this was a really good start to what I hope becomes a series.  I liked the story even with the underdeveloped world and I really loved the characters.