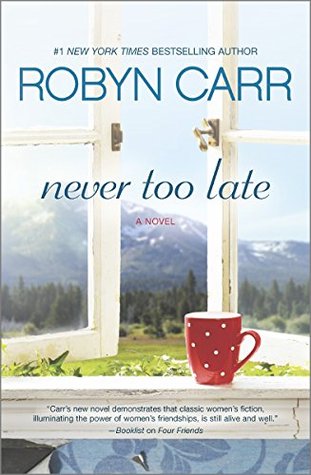 Number-one New York Times best-selling author Robyn Carr examines the lives of three sisters as they step beyond the roles of wife, mother, and daughter, and discover the importance of being a woman first.

Clare Wilson is starting over. She's had it with her marriage to a charming serial cheater. Even her own son thinks she's given his father too many chances. With the support of her sisters, Maggie and Sarah, she's ready to move on. Facing her 40th birthday, Clare is finally feeling the rush of unadulterated freedom.

But when a near-fatal car accident lands Clare in the hospital, her life takes another detour. While recovering, Clare realizes she has the power to choose her life's path. The wonderful younger police officer who witnessed her crash is over the moon for her. A man from her past stirs up long-buried feelings. Even her ex is pining for her. With enthusiasm and a little envy, her sisters watch her bloom.

Together, the sisters encourage each other to seek what they need to be happy. Along the way, they all learn that it's never too late to begin again.


My Thoughts:
Never Too Late focused on the lives and loves of three sisters, Clare, Sarah and Maggie, but mainly centered on Clare, a wife and mother recently separated for the FOURTH time from her cheating husband of sixteen years!! Even her fifteen year old son doesn’t want his mom to get back together with the idiot! When an accident shakes up her life, Clare knows it’s time to move on and embrace change.

At first I could sympathize with Clare’s family and their frustration over not kicking Roger (the cheating douche bag) to the curb sooner, but as Clare’s history is revealed I could understand why she didn’t.  I appreciated that I didn’t have to “see” the back and forth, because the story tuned in after she firmed her resolve.  Clare was a wonderful person and mother, and instead of dwelling on the negative, she tried to focus on the positive things she shared with Roger, the good times.  Clare didn’t bash her husband to her son; she let him form his own opinions about his dad, and tried to support their continued relationship. Something I thought was highly commendable and mature.  I thought Clare’s romance would take one path when the story started, but it diverted, and I was happy with the direction it went!

Maggie, the oldest of the three seems so put together, with a charmed life.  But after years together her marriage isn’t as passionate as it once was, and for some reason her husband, Bob, doesn’t seem to mind all that much. Maggie’s teenage daughters are going through some growing pains, as well.

Sarah has never found “the one”, not that she’s been really looking.  Clare’s changes inspire her to make some of her own.  Well that, and a new, gorgeous man!  I don’t want to get into her story too much so as not to spoil things.

Never Too Late was my first Robyn Carr book and I was impressed!  I loved this story! She wrote realistic, but oh-so-hot romances with no ridiculous drama or angst, but the story was so much more. Witnessing these sisters navigate the ups and downs of their lives, and come out on top was a pleasure.  I felt that Robyn Carr perfectly captured the struggles of a long term marriage, family life, and romances.  I was caught up and enchanted by each story, fully invested in the HEA of each sister!

As for the audiobook version, Therese Plummer did a fabulous job narrating Never Too Late, both female and male voices.