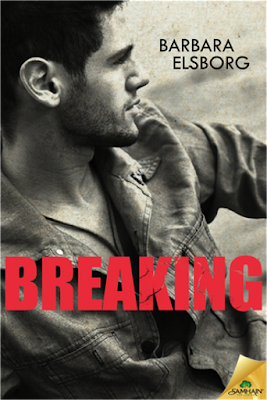 Archer Hart is on the move before the man he’s just killed is found. When a bullet whizzes past his ear, he realizes hunter is now hunted. So much for his retirement plans. Someone wants him dead and all he can do is keep running.

Downed by a hit and run driver, barrister Conrad Black is certain the ‘accident’ was deliberate but he has no proof or support. In recovery, struggling to work out of partial paralysis, he has plenty of time to wonder who regrets not striking him harder. At this point, running anywhere is a distant dream.

The confidence, determination and stamina of two alphas males will mean little if neither is willing to bend—seize the love offered—and work together to understand why they’re suddenly both marked men. Not easy for either when Archer has broken the law in the worst possible way and Conrad is the law.

My Thoughts
I picked Breaking up because I’ve been craving a Barbara Elsborg novel lately. I typically go to her when I want something witty, quick-paced and filled with chemistry.

Breaking is definitely signature of Elsborg's style. Archer Hart and Conrad Black kept the action ongoing as these two tried to outrun those that were after them throughout the story. Having two alpha males jump into a romance was definitely interesting and honestly a bit awkward at moments, but overall they made it work. I liked them together despite Archer’s constant attempts to avoid the inevitable.

Overall, not one of my favorites by this author, but definitely not bad either. I did learn something new in this story though… I did not know that barristers/lawyers in the UK wear white wigs and robes to court. Who knew?? I don’t quite find that sexy, but it was an interesting fact none-the-less.

Not bad, just not her best.
3 Suns