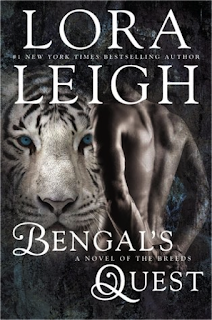 New York Times bestselling author Lora Leigh tells a story of two Breeds who are united by animal desires, only to find it’s vengeance that stirs the mating heat…


He was a shadow, ever shifting and insinuating, able to blend in everywhere and anywhere. The elusive ideal conceived and created by the Genetics Council, he went by just as many names as he had identities—the last one being Gideon.


Now calling himself Graeme, he hides in plain sight, terrifyingly close to his goal. A rogue Bengal Breed, he has loyalties to no one but himself. And he has a need for vengeance that surges hot and swift through his veins.

Graeme plans to exact an extreme and ruthless vendetta against those who wronged him—Breed and human alike. All will suffer his wrath: those who created him, those who pretended to love him, and those who betrayed him.

That includes the one at the center of it all: a seductive, enigmatic woman helpless against the man whose desire is just as desperate as his need to destroy.
And he’s on her scent…

My Thoughts
This is definitely NOT a stand-alone book. Nor is it a book you can dive into without reading the DOZENS of books that precede Bengal's Quest. Trust me, I made that mistake and was confused from beginning to end.

I've been eager to try a Lora Leigh book for quite some time and Bengal's Quest kept coming to my attention at the bookstore, on Goodreads and more recently on Overdrive. My intent was going into this book with no preconceived notion of what to expect. BIG MISTAKE! If I would have bothered to do a bit a research, I would have discovered that even longtime fans for the Breeds series were disappointed and confused with this installment that I had no clue was an installment. So imagine where that left me who had no prior background??? I was completely lost.

I had the hardest time figuring out the whole Graeme/Gideon and Cat/Claire/Catherine dynamic that I even surprised myself in completing the story... and these are the main characters! I could not figure that out...

Overall, I don't feel bad rating this story so low because I'm a firm believer that installments for every series should have an element that stands on its own... at minimum (1) explain how the Genetics Council and Breeds fit into the human world... (2) who the main characters are and (3) who/what your characters are up against. It was all so vaguely eluded to that I never really felt I had a good grasp of what was happening.

Lastly, if you can't impress me with substance, at minimum charm me with chemistry between the characters. I couldn't even give it points for that.

Not quite what I expected, but not entirely my own fault. One of my bigger misses for this year.
2 Suns