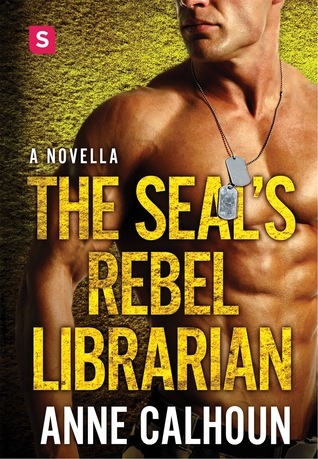 The second in the Alpha Ops novella series that features an alpha Navy SEAL and the librarian who brings him to his knees.

Jack Powell never planned on leaving the Navy, but his final mission as a SEAL left him with a tremor and a bad case of nerves. He's home, taking some college classes and trying to figure out what comes next when he meets Erin Kent, a divorced college librarian with an adventurous bucket list and a mission to get her ex-husband's voice out of her head. Jack guides Erin through skydiving and buying the motorcycle of her dreams, blithely accepting Erin's promise that their relationship is purely temporary. But when Jack gets the chance to go back into the shadowy world of security contracting, can he convince Erin to break her word and join him on the adventure of a lifetime?

My Thoughts:
Erin Kent may look prim, proper and professional as a librarian in Lancaster’s College Clarke Library, but underneath all that is a free spirit.  Her thirst for new experiences and daring was stifled by her ex-husband until she couldn’t take it anymore. Now, finally, after her divorce has been final for six months, Erin is getting to her daredevil to-do list.  Buy and ride a motorcycle, skydive, and date are part of her list and she’s about to check off several things when Jack Powell comes into her life.

Jack Powell resigned from the SEAL’s after the last mission left him with PTSD.  Sleepless nights, jumpiness, and a tremor make it impossible for him to take on security work as a civilian either so he’s taking a few psyche classes at the local college and attending therapy.  Jack never dreams Erin, the seemingly buttoned-up librarian has a naughty streak, or that helping her fulfill her to-do list will be the best therapy for him.

At first Jack Powell is an adventure Erin can’t help but take, but soon their steamy nights and fun filled days mean more to her.  Erin is worried that her heart has become involved, but she doesn’t realize things are serious for Jack, too.  They have some short time of miscommunication, but thankfully, probably in part because this is a novella, it doesn’t last long.

This is the second in Ms. Calhoun’s Alpha Ops series and once again her vivid writing, relatable characters and sizzling romance make this novella stand out and above other short stories.