I've long been a fan of Samantha Young's romances so I'm thrilled to share my review of Every Little Thing as well as an awesome giveaway of ALL SIX On Dublin Street series generously provided by Berkley and the giveaway is open INTERNATIONALLY!! Awesome, right?! 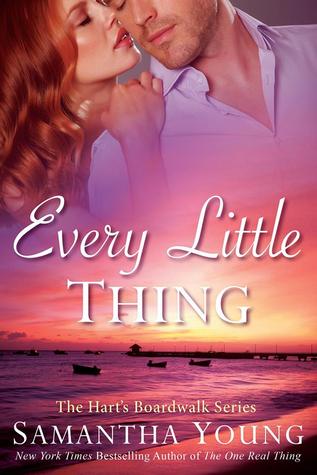 Hartwell, Delaware—the perfect place to get away from it all, and find what you never knew you needed…

Bailey Hartwell has many reasons to feel content—her successful business, a close circle of friends, and her steady boyfriend…even if their romance feels staid after ten years without a serious commitment. The only challenge in her life comes in the form of sexy businessman Vaughn Tremaine. She thinks the ex-New Yorker acts superior and that he considers her a small-town nobody. But when Bailey’s blindsided by a betrayal, she’s shocked to discover Vaughn is actually a decent guy.

Vaughn admires Bailey’s free spirit, independence, and loyalty. As his passion for her has grown, his antagonism toward her has only worsened. Every little thing Bailey does seduces him. But when Vaughn’s painful emotional past makes him walk away in fear he will hurt her, it opens an old wound in Bailey, and she uncharacteristically retreats.

Once Vaughn begins to realize he’s made the biggest mistake of his life, he has no choice but to fight like he’s never fought before to convince Bailey that the love they’ve found together only comes around once in a lifetime.

My Thoughts:
Bailey and Vaughn have had an antagonistic relationship since Vaughn built his hotel on the Bailey’s beloved boardwalk.  They verbally spar and snark, and could be pretty terrible to each other, but everyone around can sense the underlying attraction there.  That’s been a moot point since Bailey’s been with the same guy for the last ten years, a lackluster relationship to anyone with eyes, but it’s safe and comfortable to Bailey.  Tom is reliable and would never break her heart, or would he?  That question is answered leaving Bailey on her own and ready to move on.  She’s attracted to Vaughn, and can finally acknowledge it, but should she when she barely likes the man?

They dynamics in their relationship have changed and Vaughn finds himself drawn to Bailey over and over, and even though he hates that he’s attracted to her, there’s no use in denying it.  He’s not interested in settling down, so it would be a waste of time to act on his feelings, but still, he can’t stay away from Bailey.

Both Bailey and Vaughn hate that their attracted to each other for different personal reasons.  For one, Vaughn acts like a jerk pretty much every time Bailey runs into him, and Bailey isn’t very nice either.  One hurt turns into another snipe, and they just keep the animosity going, until Bailey runs into some trouble with the notorious Devlin’s and Vaughn makes it his business to defend her. Seeing Vaughn in a new, positive light changes Bailey’s initial opinion and both let their guard down for a steamy night of passion.  Of course, this is where Vaughn turns into a bigger ass and screws up everything.  There was push and pull, and these two keep circling, because they can’t stay away!  The heart wants what the heart wants! For the most part I was wrapped up in their story, getting to the whys for Vaughn’s reluctance, and Bailey’s trust issues, because they do each have their reasons.  I did roll my eyes a time or two when the drama was a bit predictable, and annoying, but thankfully it wasn’t drawn out.

On a side note, I found Bailey’s sister, Vanessa so very irritating I wanted to reach into the book and smack her! Bailey didn’t just lie down and take her antics, but she was much nicer in the end than I could’ve been.

I enjoyed Every Little Thing far more than the first book in the series and I’m very interested in the next story to come.  It seems like Jack Devlin and Emery might be next.  I wonder how Jack will redeem himself.  Can’t really say I’m over here swooning, but I haven’t heard his side of the story yet.

Berkley has kindly provided a giveaway of  all six of the On Dublin Street series! The giveaway is open INTERNATIONALLY!!!  Yay!! Simply fill in the rafflecopter below for a chance to win!