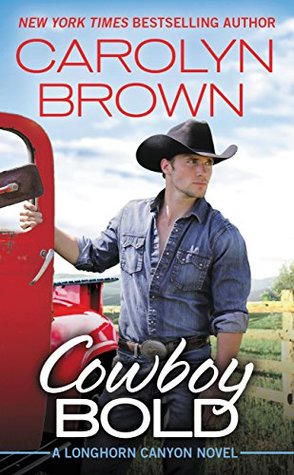 One city girl, one die-hard rancher, and eight mischievous kids. What could go wrong?

Every summer Cade Maguire looks forward to opening his Longhorn Canyon Ranch to underprivileged city kids. But this year, he's having no luck finding a counselor for the children--until Retta Palmer walks through his door.

Flat broke after selling everything she owns to pay for her father's medical bills, Retta is thrilled to hear of an opening for a counselor position. She's not as thrilled about the ranching part, or the sexy cowboy with beautiful blue eyes who's her new boss.

After being left at the altar two years before by his fiancée, Cade isn't sure he can take another heartbreak. And Retta isn't even sure she wants to stay. But the sparks between them are absolutely undeniable. And with a couple of lovable kids and two elderly folks playing matchmaker, Cade and Retta may find that the best way to heal is with each other.

My Thoughts:
Retta takes a job at the Longhorn Canyon Ranch as girl’s camp counselor just until she can get her old city bank job back.  Retta is still reeling from the loss of her father, and the family ranch, and has no idea how this “temporary” job will end up affecting her. This is a five-week camp for underprivileged city boys and girls to get away, learn responsibility, how to work on a team and have some fun.  Retta doesn’t plan on losing her heart in the process, but a sexy cowboy, the ranch and the kids have her re-thinking her long-term plans.

Cade McGuire, the owner of Longhorn Canyon Ranch is smitten with Retta at first sight, but he’d like to protect his heart and keep things professional.  He’s had his heart broken by one city girl before.  But Retta’s different.  She may claim to want the city life, but he can tell ranching is in her blood.  The way she is with the camp kids melts his heart, too, and soon the pull between them becomes too irresistible to fight.

Carolyn Brown once again charms with Retta and Cade’s romance. Humor, sweet and sexy banter; it was a slow and steady progression to HEA.  These two just made sense together, even if they didn’t realize it at first. The kids added a fun to the story as well. Some of them were prickly with attitude to begin with, so it was touching to see how ranching life and loving attention softened them up and got them to work together as a team.