Review & Giveaway: Off the Grid by Monica McCarty 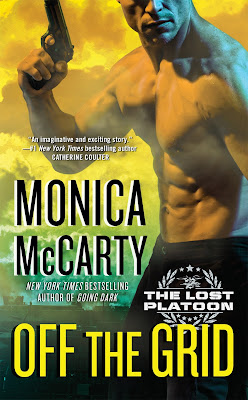 A hunt for dangerous secrets leads to explosive chemistry in this exhilarating romantic suspense novel from the New York Times bestselling author of Going Dark.

Investigative reporter Brittany Blake may have stumbled upon the story of a lifetime in her search for her missing brother. When he seemingly disappears overnight, she refuses to accept the Navy's less-than-satisfying explanation. She begins her own investigation, which leads her to top-secret SEAL teams, covert ops, and a possible cover up...

John Donovan is having trouble biding his time, waiting for his Commanding Officer to figure out who set up their platoon. John's best friend and BUD/S partner, Brandon Blake, was one of the many lives tragically lost in the attack against his team. When Brandon's sister, Brittany, tracks John down, looking for answers, he realizes that she may be their best bet--or bait--for finding out who is targeting SEAL Team Nine.

My Thoughts:
Oh, I’m loving this series! Covert-ops-gone-bad with a SEAL team thought to be dead, they’re on the run and in hiding. Just like the first book there’s action, danger, conspiracy, and the best part…romance!

Brittany Blake’s brother Brandon, along with his best friend John Donovan have gone missing and suspected to be dead.  Brittany knows they’re part of some super-secret Navy SEAL team. Since she’s has had less than stellar dealings with the government and cover-ups in the past, Brittany’s pretty suspicious of all their explanations.  She decides to force the government’s hand by publishing sensational exposé type newspaper articles questioning the team’s whereabouts and the mission they were lost on, dubbing the stories: The Lost Platoon.  Her articles are stirring up interest and not the good kind. Brittany’s got a target on her back and the survivors of SEAL Team Nine are being put at risk for discovery with all the scrutiny.

John Donovan couldn’t have a serious relationship when he first met Brittany, but their connection was instant and intense.  They didn’t part on good terms, but John thought it for the best even though he’s never felt the same way about any other woman.  Hiding out in Finland has become dull, but things take a turn when Brittany starts stirring up trouble with her articles.  Scott, the team’s Commander, orders John to handle Brittany and lock down the talk, but his efforts throw Brittany right into his path again with danger trailing along after. Will they survive?

Off the Grid has a second chance romance, one of my all-time favorite types, and this one’s oh-so-good! With John being the best friend of Brittany’s older brother, they have a history.  There was a connection, and then John broke her heart.  Brittany hasn’t forgotten the hurt but doesn’t matter, when they meet again fireworks spark and ignite, and the pull between them is irresistible!  That first kiss, woo!! These two are so very hot together!

As if their romance wasn’t enough we also have Colt and Kate.  I’m totally riveted by their history (they were married) and their exchanges now in the present.  Colt was a total ass to Kate, but they’re working together again to get answers for SEAL Team Nine.  The hurt (on Kate’s side) and anger (on Colt’s side) is palpable!  The revelations through this story were soooo good and I’m DYING to find out what happens next!

Off the Grid is the second book in The Lost Platoon series, but it’s not necessary to read the first book to enjoy it. However, the first book, Going Dark is really good too, so why not read it as well?

Berkley has generously provided a Paperback Copy of Off the Grid for one lucky reader.  Giveaway is open to US Residents only.  Fill out the rafflecopter for a chance to win. Good luck!