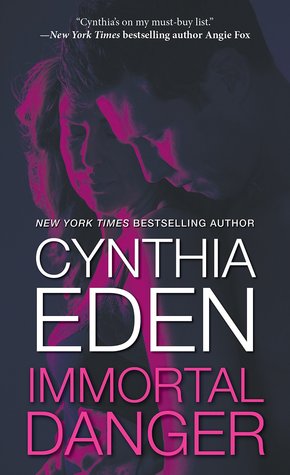 WHO NEEDS AN APP WHEN YOU CAN PAY IN BLOOD?

Once, Maya Black was a badass cop patrolling the streets of L.A. She still keeps the city safe, but these days her bad guys of choice include demons, werewolves, and assorted nocturnal scum. Something Maya knows a thing or two about. She's a vampire--and not thrilled about it. Payback meet bitch.

Adam Brody hopes Maya is as dangerous as they say she is. He needs her to help rescue his niece Cammie from a ruthless band of vamps, and he's willing to pay--in blood. Trusting her is another matter. Adam has never met a vampire who doesn't lie. Then again, he's never met anyone like Maya, who fills him with a desperate need that ignites into explosive, no-holds-barred encounters . . .

My Thoughts:
When his niece is kidnapped by a vicious group of vampires Adam Brody seeks out Maya Black’s help to find her.  Even though Maya is a vampire herself she has a fierce reputation of taking out the bad guys, vamps, demons, whatever kind of creature.

Maya was a police officer when she was forcibly turned into a vampire, and she hates her kind because most of them are murdering fiends with no conscious.  She thinks Adam’s mission will probably get him killed, thinking he’s just a human, and she doesn’t want to be part of that.  However, Adam’s willing to pay and he’d probably go off on his own anyhow so Maya’s stuck.

Adam and Maya are very distrustful of each other as they join forces, but there’s a spark of attraction brewing between them from the beginning. Adam can’t stand vampires, but he can tell Maya is different, and despite her prickly demeanor she truly cares about people.  Adam he can’t help but admire her strength and skills taking on baddies twice her size and kicking ass!  Maya assumes Adam is a helpless human and he lets her think that, but Adam is much more.  I won’t spoil things by telling you what he is, but I thought it was pretty cool!

In between all the action and danger Adam and Maya battle with their desires. At first, it’s animal attraction, irresistible and desperate, but they start to fall for each other a little more with each passing day.  Cynthia Eden writes some truly hot stuff and whether it be her romantic suspense or paranormal stories, she has her romances dialed to sizzle! Adam and Maya were no exception!

Immortal Danger was fast paced, full of action and a lot of fun. It looks like this story was originally published back in 2009, as the start of the Night Watch series, but may have been updated.  Maya and Adam’s story wraps up, but the series continues centering on other characters.  I plan on getting to the next book soon.

Posted by Rachel @Waves of Fiction at 8:20 AM