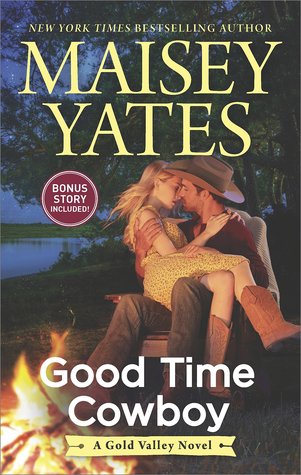 In Gold Valley, Oregon, forbidden desire just might turn into the love of a lifetime…

When Lindy Parker lost her cheating husband, she gained a vineyard. She’ll do anything for Grassroots Winery, including teaming up with the hottest devil she knows, rancher Wyatt Dodge. Wyatt is her ex’s friend and has an ego as big as the bulls he rides. But in spite of that, disciplined Lindy has always wanted him…

Lightning struck Wyatt Dodge the first time he saw Lindy Parker. But there were two problems with that: she was married to his friend, and Wyatt doesn’t do strings. But now Lindy is free, and the two of them can finally explore the heat that’s burned between them for so long. But can Lindy make this good time cowboy decide on forever?


My Thoughts:
Wyatt and Lindy have been squaring off since they first appeared as side characters in previous books. Wyatt’s been pushing Lindy’s buttons while she tried to freeze him out and keep her distance.  Too bad for Lindy that they’re partnering up for business because they’re about to get a lot more time together.  Lindy’s promoting wines and tours through her vineyard using Wyatt’s horses, and Wyatt is featuring the experience as an excursion available to his new ranch/inn guests.  There’s been a love/hate thing going on between these two because of the history and that’s about to come to a head.

I love how Maisey Yates gets to the heart of her characters and their motivations, and that’s part of what makes them so hot is that you get their emotions before there’s anything physical between them.  There’s a delicious buildup between Lindy and Wyatt!  Loved that even though there were some bumps in the road for their relationship there wasn’t any over-the-top drama.

I’m really looking forward to Grant’s romance, because that man deserves some loving! And I really hope there’s a romance for Bea and Dane! She’s got such a massive, intense crush on Dane that I’m a little afraid her heart might get squashed, but I’m crossing my fingers that he finally opens his eyes to Bea!

Posted by Rachel @Waves of Fiction at 6:15 PM