Review & Giveaway: Luck of the Draw by B.J. Daniels 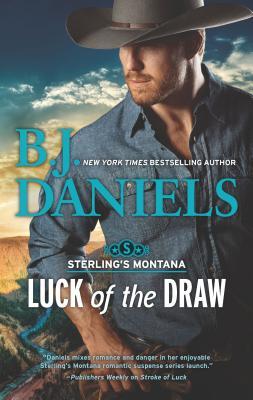 When Garrett Sterling leaves for a horseback ride through his family’s sprawling Montana property, he’s expecting a relaxing break from the construction at the Sterling guest ranch. What he gets is something far more sinister. It all happened so fast that it’s hard for Garrett to sort out the facts. But two things are certain: someone is dead and the killer knows there was a witness.

When a woman from his past emerges as a key piece of the investigation, Garrett is determined to uncover what really happened that day, how she’s involved—and why everything she’s ever told him is a lie.

My Thoughts:
Luck of the Draw started off with a bang when Garrett Sterling, on a ride around his ranch, witnesses a fatal crime, too far away to do much about it.

Little does he know that this will put him into the path of the woman who left without a word, breaking his heart two years prior.  He’s never been able to get over Joselyn and seeing her again is a punch to the gut, but she’s in trouble and even though he doesn’t quite trust her Garrett wants answers.

After that explosive start Luck of the Draw had a bit of a lull before it picked up again, with some back and forth mulling on Garrett’s part, inner thoughts on whether he should trust Joselyn again, and lectures by the sheriff about the same thing.  After a few things were revealed the story picked up again with Garrett, Joselyn, and the sheriff trying to get to the bottom of the mysteries behind the attempts on Joselyn’s life. I was eager to find out as well.  Garrett and Joselyn’s pursuit of the truth isn’t free of danger, and they try to stay one step ahead while staying alive.

Luck of the Draw was an entertaining combination of mystery, suspense and romance. This is the second book in the Sterling’s Montana series, but it’s not necessary to read the first book to enjoy this story.  While Garrett and Joselyn’s story was wrapped up, there’s a burgeoning romance between the sheriff and the Sterling’s long time housekeeper, Dorothea, and the ending events with the sheriff is a mystery that I think will continue in the next book.

Harlequin generously provided a Paperback Copy of Luck of the Draw!  The giveaway is open to US Residents only. Simply fill out the rafflecopter for a chance to win. Good luck!

a Rafflecopter giveaway
Posted by Rachel @Waves of Fiction at 9:36 AM