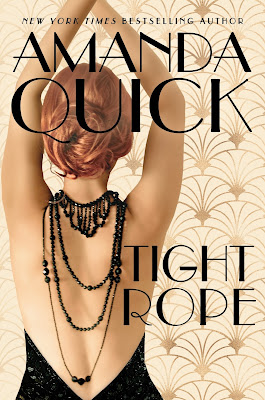 An unconventional woman and a man shrouded in mystery walk a tightrope of desire as they race against a killer to find a top secret invention before it's too late.

Former trapeze artist Amalie Vaughn moved to Burning Cove to reinvent herself, but things are not going well. After spending her entire inheritance on a mansion with the intention of turning it into a bed-and-breakfast, she learns too late that the villa is said to be cursed. When the first guest, Dr. Norman Pickwell, is murdered by his robot invention during a sold-out demonstration, rumors circulate that the curse is real.

In the chaotic aftermath of the spectacle, Amalie watches as a stranger from the audience disappears behind the curtain. When Matthias Jones reappears, he is slipping a gun into a concealed holster. It looks like the gossip that is swirling around him is true--Matthias evidently does have connections to the criminal underworld.

Matthias is on the trail of a groundbreaking prototype cipher machine. He suspects that Pickwell stole the device and planned to sell it. But now Pickwell is dead and the machine has vanished. When Matthias's investigation leads him to Amalie's front door, the attraction between them is intense, but she knows it is also dangerous. Amalie and Matthias must decide if they can trust each other and the passion that binds them, because time is running out.

My Thoughts:
Amalie came from a family of flying trapeze artists but quit the profession when a crazed man almost took her life.  An exciting opening to a thrilling story!  Deranged murderers, spies, espionage, non-stop action and romance makes this tale difficult to put down!

Amalie now resides in Burning Cove after buying a beautiful mansion with the intension of using it as a glamourous inn to house the rich and famous who’d like to get away.  She got the mansion for a song, not before finding out about the rumors that it’s supposedly cursed.  Her first guest, a famed inventor, is murdered, fueling the speculation.  Enter Matthias Jones a man supposedly connected to the mob asking a lot of questions, and not giving a lot of answers.  Amalie is damned if the inventor’s murder is going to put her out of business and inserts herself into Matthias’ investigations.

Amalie and Matthias dodge danger at every turn, and the intensity quickly bonds them making the attraction they’ve felt from the start ignite, turning into a fierce passion!  I loved their chemistry and was happy that almost none of the conflict or drama came from their developing romance.

Loved the setting of Burning Cove, a fictional California coastal town set in the 1930s. A picturesque getaway for the rich and famous.  The winding seaside cliffs overlooking the gorgeous Pacific Ocean reminds me of Big Sur, Monterey or Carmel, but with a bit more old-Hollywood glitz. This is the third installment in the Burning Cove series, but each can be read and enjoyed as a standalone.  While Amalie and Matthias’ romance wrapped up nicely there was a little discovery that hinted there’s more to come, but maybe focused on another couple?  I look forward to it!