Review & Giveaway: The Cowboy and His Baby by Jessica Clare 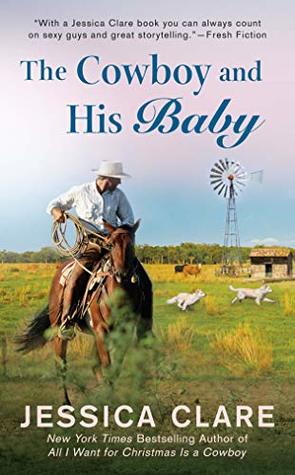 From New York Times bestselling author Jessica Clare comes a contemporary Western romance about a cowboy who is in for the ride of his life….

Dustin is a ranch hand with a reputation around town as a ladies’ man. He loves flirting and the thrill of the chase. When he tilts his cowboy hat just so, no one can resist his charms. It’s all fun and games for Dustin until he meets a woman who sparks real feelings in him, and he’s blindsided by love.

Annie is an animal trainer working on set for a film. Other than her furry, canine coworkers, she hasn’t connected with the rest of the movie’s crew. It’s only when a certain cowboy catches her eye that Wyoming becomes interesting. She intends for their romance to be a fling, but by the time filming wraps up, she’s unexpectedly pregnant.

While Annie is prepared to walk away and raise her baby by herself, Dustin isn’t so ready to say good-bye. He has to prove to Annie that she has a future in Wyoming and capture her heart before it’s too late....

My Thoughts:
Annie, a dog trainer, is in Wyoming for a film shoot. She wasn’t expecting to have a fling, but Dustin, a local cowboy gets past her usual shields and they end up spending all her off-time together.  He’s sexy and sweet, and she finds herself falling hard.

Annie feels like a breath of fresh air for Dustin. She wasn’t falling all over herself to go out with him. For once he had to work to get a woman to go out with him.  But more than that, she’s got a genuine heart, speaks her mind and doesn’t play games. She’s the woman he never knew he wanted, he never thought he’d want anything but a casual good time, but Annie has him re-thinking his plans.

Annie ends up pregnant, and a misunderstanding has her questioning whether she was all wrong about Dustin.

I kind of love the unexpected pregnancy troupe! It was clear Dustin and Annie were falling harder than they counted on before that was ever thrown in the mix, and Annie’s pregnancy forces them to get through a misunderstanding that may have parted them for good otherwise.  Dustin was a complete sweetheart determined to have a future with Annie and his baby.

Annie was a little insecure so I could understand why she made a snap decision without getting the full story, but thankfully that part of the story didn’t have much page time, so the frustration over that was low.  Also, Annie fully owned up to her mistake and was really sorry.

Their romance was realistic with both Dustin and Annie each vulnerable and insecure in parts, but it was also sweet, and pretty hot!  I was fully invested in their journey to a HEA!

I part listened and part read The Cowboy and His Baby.  I’ve listened to Abby Craden narration before and she’s great with both female and male voices, especially with a Southern accent, but I usually have to crank up the speed to 1.5 times normal.  Granted, there aren’t many audio books I listen to at normal speed, most are 1.25x or higher.

a Rafflecopter giveaway
Posted by Rachel @Waves of Fiction at 11:41 PM